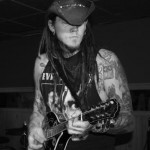 Jayke Orvis isn’t just a songwriter and mandolin player, he is a composer. When I first heard the song “Raise the Moon” on .357 String Band’s first album, I knew this was more than mere throwing words and chords together. “Dreadful Sinner” from his new album Its All Been Said is in the same vein, with tight arrangements in a composition-based approach that is more like classical music than anything.

The exquisite thread that Jayke weaves by interchanging notes and patterns between mandolin and acoustic guitar is spellbinding. Ambient sounds and real-life audio add to the expansiveness of the song, and make it one where the full vision and potential was realized without any corner cut. So what better song to make a video for, and to take the same care, time, and attention to detail with.

Jayke procured the services of video maker Sean Martin, and it was shot in and around Pittsburgh using friends as actors. The lake scenes were shot at a place called Shenley Park, and necessitated cast and crew carrying a mess of gear 300 yards and back, including a 100lb. generator and a boat used to sail gear across the lake. I’d have to say it was worth the trip, because however low or no budget this video was, you can’t tell from the outcome. Brilliant camera work, editing, and concept.

And a quick clarification. When Jayke Orvis and The Broken Band start on tour next month, it will be with the full lineup of The Goddamn Gallows that will headline, so you will get James Hunnicutt, then Jake Orvis & The Broken Band, and the Gallows as well, so don’t miss this if its rolling your way!