Jayke Orvis Gets Deep About .357 Breakup 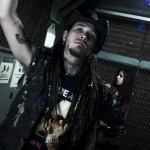 ecent interview posted on the White Trash Revival Episode #62, Jayke Orvis, formerly of the .357 String Band, and now with The Goddamn Gallows, opens up more than ever about how it was partly his own attitude that led to him being fired from .357, and that his biggest beef was not that he was let go, but how.

“Everything was fantastic, I started really not enjoying things the last year, and then they finally just kicked me out.”

“There was no closure really. It was one of those things, like I explained to Joe (Huber – banjo for .357) later on, it would have been great if we’d all just sat down and said “we need to talk about things.” We would have hugged it out, because I would have left anyway because I was not happy with a lot of things. It could have been so easy. Just the way it happened, the way it went down is what made me so hurt by it. Just tossed out like a bugger, or like a groupie.”

“I know it happened for a good reason. I’m happier now anyway. You know, if it wasn’t for that I wouldn’t be playing with The Gallows. I’m just thrilled to be with these guys.”

You can listen to the rest of the nearly hour long Jayke Orvis interview, where he also talks about his upbringing, his new album It’s All Been Said among other things.

Jayke, Rachel Brooke, and James Hunnicutt are on tour right now, and this is a can’t miss if it’s coming anywhere near to you. Below you can see a duet with Rachel and Jayke, originally released on the .357 album Fire & Hail, but seen here as the FIRST time it has ever been performed live: