For years we took for granted that the mainstream music industry was in a calamitous free fall, spiraling towards cataclysmic implosion. We were so sure of this diagnosis, we used it as the crux of all our music theories. Then lo and behold, the industry figured out how to pull out of the tailspin, and independent artists that years before we’d never dream of seeing getting big breaks began to get noticed. Hellbound Glory has been out on arena tours. Sturgill Simpson is touring with Dwight Yoakam. The Alabama Shakes are playing SNL, Shovels & Rope is playing ACL, and everyone is playing Letterman. All of a sudden it’s not appropriate to be so sullen about the direction of music. 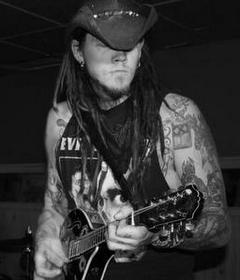 But if you’re looking for an act that is still virtually unknown, one that is buried deep in the underground and that embodies the raw energy of the roots movement and not just a commercially-viable watered-down derivative, one whose active ingredient still works on even the most hardened of roots addicts, then Jayke Orvis and The Broken Band might be your drug.

A founding member and the mandolin player for the groundbreaking .357 String Band, Jayke Orvis may have taken a long and windy road to finding his way in the music world, but if his current sonic output is any evidence, he has found his path, and it is righteous. What made the .357 String Band so singular was that it was four dudes testing the very limits of human ability with instrumentation, while positively debilitating you with the emotion of their songwriting. When Orivs was undutifully released from .357 (the band eventually disbanded in late 2011), he became more of a singer/songwriter type of performer, sometimes favoring the guitar over his mandolin.

As the name alluded, Jayke’s “Broken Band” was a hodgepodge of plug-in players that all did dutiful jobs, but never had the stability to congeal enough to hone in on everything that the music could be. Orvis himself was a revolving member of the Gothic roots outfit The Goddamn Gallows, and regularly borrowed from their players for his Broken Band on dual Orvis/Gallows tours. The collaborations were enthralling and memorable in their own right, but never allowed Jayke the intimate focus on his own music that it needed to realize its true potential.

Jayke finally declared earlier this year that he was taking his last tour with the Gallows, and trained his attention solely on a solid, permanent Broken Band lineup that includes guitarist James Hunnicutt, and former Bob Wayne Outlaw Carnies’ Liz Sloan and Jared McGovern on fiddle and upright bass respectively. With stability and a shared vision of making a band around Jayke’s music, but one where all musicians are treated as equal, Jayke Orvis & The Broken Band have re-captured the fervor and spellbinding performance aspect that made the .357 String Band such a force of music nature. If anything, The Broken Band may be taking it a step further with a deeper attention to composition, pushing all four players to the edge of their abilities, and the edge of human capability itself, balanced by slow and mid-tempo songwriter material.

Jayke Orvis & The Broken Band are the underground roots equivalent of the Punch Brothers, and are one of the top tier performers of the underground sub-genre. But as Jayke explains, he’s not looking for recognition from the Americana Music Association or berths on arena tours with big country names. “I want to open for Slayer,” Jayke told me right after their live set at Austin, TX’s Scoot Inn on 5/06. “Well I mean that may be a little hard now, but I want to show punk and metal kids that roots music can be cool.”

As the overall roots world seems to be benefiting from a rising tide, it’s not hard to wonder if some of the best of the underground are being left behind, and how long this rising tide will last before the popularity arch begins to fade. Jayke Orvis is one of those artists who has stuff that could catch fire. He’s one that could benefit when roots fans conclude that Mumford & Sons just doesn’t have the mustard to hold their attention long-term.

Jayke Orvis & The Broken Band recently released their 2nd album, Bless This Mess on Farmageddon Records. His first album It’s All Been Said constituted the formation of that record label. Though the album has officially been out for a while, you won’t find it on Amazon or iTunes. You can’t stream it on Spotify or Pandora. I secured my copy at a live show, and was told there was only a few more copies left in their merch bag before they would be able to restock in a few days. A good problem to have in some respects, but one that makes the outreach of the music problematic when people can’t get it.

Bless This Mess didn’t have a well-promoted release date, if any true release date at all. No promotional push paralleled its availability. No review copies were sent out to independent music outlets, including Saving Country Music which named Jayke Orvis its 2010 Artist of the Year. In 2013, statistics show that for every song bought, 100 are streamed, and that albums that are streamed for free prior to their release sell more copies. To not make an album available at all digitally puts the album and the artist at an unparallelled disadvantage. This does not necessarily mean this is neglect on the part of Jayke or his label. All of this very well may be on purpose, and I’m sure it will be available digitally eventually. But the point of releasing music is to get it in as many hands as possible, and an artist holds no more potent promotional tool than when they release an album.

When I loaded Bless This Mess into my computer, the tracks were unmarked. I got “Unknown Artist” and “Unknown Songs” with the track times and numbers. If the idea is that this is an underground approach to releasing music, this is somewhat misguided. Jello Biafra was such a genius because he was able to get his music right beside the music of big labels in record stores by doing it the right way. Legions of hopeful artists with awful music release albums every day that in no way reach the quality level of Bless This Mess, but get more attention because they’re released the right way. You want to know what so much popular music sounds so bad? Because some people are willing to understand the correct approach. Jayke Orvis’s music is too good to put limitations on it by not following the easy and well-established modes of how to release an album.

The counter-point is that Jayke’s fan base is so loyal, all these concerns are silly. But the goal of any artist, even one that is not driven by fame or money, is to attain a healthy sustainability that hopefully factors in at least some moderate growth. 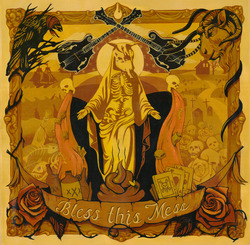 Though Bless This Mess seems like it may be one step behind where Jayke & The Broken Band are right now with their live show, it still boasts some excellent arrangements and performances, and a wonderful lineup of both originals and covers. Hank’s “Kaw-Liga,” Ralph Stanley’s “Bound to Ride,” and The Weary Boys’ “Pick Up The Steam” round out a remarkable set of well-interpreted renditions. Banjo player and part-time Broken Band member Joe Perreze also offers up one of the albums standout instrumentals in “Clankertown.”

This all leads into Jayke’s original material. Whether its blazing instrumentals like “Murder of Crows,” or more singer/songwriter-style material like “West Wind,” and what may be the album’s legacy track “Crooked Smile,” Jayke Orvis shows himself as one of the premier purveyors of Gothic-infused American string music worth a wide ear and critical acclaim. And let’s not gloss over that Jayke also scores well on the intangibles. With the way he presents himself and his stage presence, he has that essential charisma to hold an audience captive, while at the same time the humility to defer to his players and make it more about the music than himself.

Jayke Orvis & The Broken Band is a name that deserves to be ready on the tongue whenever folks query for names of top flight string bands to check out. But it will only get there if at least cursory attention is paid to the promotional side of things. Making good music isn’t enough. Marking track names on albums and distributing an album digitally is the easy part. The hard part is making music that touches you on a human level, and does so in a pioneering way, and this is what Jayke Orvis & The Broken Band do with almost unfair effortlessness.

Two guns up on the Jayke Orvis live show