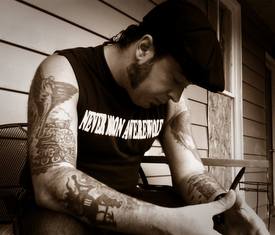 It’s been nearly 5 years since songwriter, performing artist, and pioneer of underground country J.B. Beverley released his last album with the country band The Wayward Drifters, and now he’s finally back with a new record, but it’s not with The Wayward Drifters, or exclusively a country project. Instead it’s a very introspective and conceptualized work that touches on many sonic shades referring to Beverly’s wide musical palette that he’s explored with various projects he has been a part of over the years.

Since Stripped to the Root and some of its songs might lend to a little curiosity or downright confusion, we decided to place a call to J.B. to get his take on what people can expect from Stripped to the Root. The entirety of the 20-minute interview can be heard below, and the meat of the interview is transcribed below that.

Purchase Stripped to the Root from Rusty Knuckles

There’s been some big news here lately. A good Outlaw country artist named Wayne Mills has passed away. Did you know Wayne very well, and if so what did his music mean to you?

I didn’t know Wayne very well in the big scheme of things, as far as for a long time. The joke we made when we were hanging out in Altamont [at the Outlaw and Legends tribute concert] was that we knew of each other a lot longer than we’ve known each other. But he impacted my life in a great way, both personally and musically. An amazing, from the heart and from the gut songwriter, very pure, very true to his personality and cultural roots. And as a man, he’s was as stand up of a guy as I’ve been around since I can remember. He was a really remarkable person that was taken out of this world too early, that’s for sure. 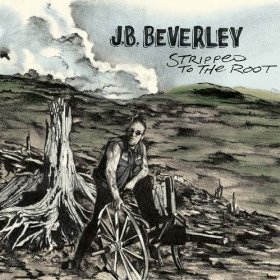 You’ve said about your new album Stripped to the Root that it’s not a country record; that there’s some country stuff included, but it’s not a Wayward Drifters record which is your country band. Explain to folks what the idea and inspiration is behind the album, and what they can expect.

The album was sort of a happy accident. It wasn’t something that I planned to do. I had the same band in the Wayward Drifters for a long time, and Johnny [Lawless] took a temporary retirement from the road, Dan Mazer my banjo player had moved to the West Coast, so for the first time in a decade I found myself without a band and some time to kill. And I was going through some really tumultuous personal stuff. My long-term girlfriend of several years and I had split up, a couple of my friends had passed away, my dad had taken ill, and I left Virginia and moved to North Carolina. But through all of this, what became Stripped to the Root basically was a collection of songs both that I had written, or either heroes or friends in some capacity had written that were helping me get through that time.

The best way to put it is that it’s not so much a record, or if it is a record, it’s a concept record. And to look beyond that, a good friend of mine named Cameron Romero who’s a filmmaker said it best, he said, “This is less an album in a conventional sense, and more a soundtrack to the last three years of your life, which is very bold and very naked.” There’s a certain vulnerability to this record. Every song is very personal. This album was very cathartic for me. It was something that I had to do, and something I don’t think I could ever do twice.

What made you decide to release Stripped to the Root through the Rusty Knuckles label?

I have a lot of love and respect for the folks at Farmageddon, but it wasn’t working out the way I wanted it to. I really wanted the album to come out, and the Rusty Knuckles folks offered me finishing funds and a means of really promoting the album and getting it properly distributed, and really just wanted to see it happen as bad as I did. At the time I’m sitting here with medical bills and legal bills, plus my fans have gone since 2009 without a Wayward Drifters record. I had to do something. I couldn’t wait another six months or a year. I really had to move on it. And so it really came down to just having to get it out, and doing what was best for the record and for the fans. 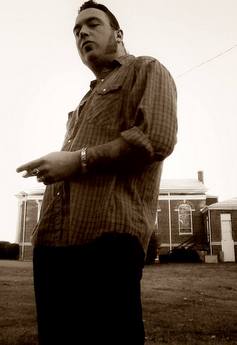 You say these songs are really personal to you, so let’s talk about a couple of them. The first one “Disappear On Down The Line” has been out there for a little while. It’s a song that has spoken to a lot of people. What was the inspiration behind that song?

That song, and the song “Stripped to the Root,” I kind of call them sister songs in a way. They were both written on the same night. And they were the two songs that led to my concept behind the record. So I can thank both of those songs for being the springboard. The actual story behind “Disappear On Down The Line” is pretty much transliterated through the lyrics. I was in my home, totally isolated and alone, my woman had left, I’d buried my friends, and all the proverbial voices of doubt and chaos, and all this negative stuff was fueling my mind at the time. I use the parable that the demons were dragging me down. Granted, there weren’t literally ghouls in the room tugging me through the floorboards, but as far as the emotional, spiritual, and mental direst and in some instances torment I was under, it was very real.

“Disappear On Down The Line” and “Stripped to the Root,” both those songs, I wrote those songs to avoid picking up my pistol and doing something real stupid. There’s no real other way to put it. I’ve never been a suicidal type, I’ve never tried it, I’ve never threatened it, I’ve never really entertained the idea. But at that point in my life, I was so down and out, I did find myself sitting there staring at my pistol. And the instant that I felt that way, I knew I had to get it out of my system or I was gonna die. So I penned those songs in an effort to get through that night and keep from doing something stupid. And the beautiful part is that I’ve been able to treat the execution of this record as a catharsis, as in the sense that you have all these negative feelings and all this stuff weighing on your ticker and spirit, and if you’re able somehow to leave it in the art work, leave it in the song, then it no longer haunts you.

Yeah, Ronnie is singing on it as well. I was working on that song, and Ronnie had just come by my studio to visit, and he made a couple of lyrical suggestions. And after his second or third suggestion that I actually liked better than what I had written, I just said, “Okay man, I’m going to use your words and you officially co-authored this song with me. So it kind of came about impromptu. It was really organic.

And what’s the message you’re trying to convey with “All The Little Devils”?

I’ve seen a transition in music in recent years. I’ll give you an example. I loved what Hank3 did with Straight to Hell. I felt in a very real way it was a concept record with a very honest depiction of where his heart was at the time. But what I saw in the aftermath of the popularity of that record has been a wide variety of bands that are basically trying to cash in on the whole “drinking, drugs, Satan, let’s raise hell.” There’s a time and place for all that. I like to have a good time. I’ve fucked up many things in my life. I’ve not always been a great person. But at the same time, I don’t understand why a lot of these people feel the need to celebrate being a degenerate, to celebrate having no honor. I just don’t get it.

Like I say in the song, I’m not saying I’m any better. I’ve made many of those same mistakes. The difference is I learned over the years, and I no longer celebrate it. It ain’t me trying to force feed my politics or spiritual beliefs on anybody. I’m not trying to put anybody down. I’m all for people trying to reflect their feelings, and their sentiments, and their dreams however they choose to. But the problem is that there’s got to be more to it. You can’t have all Saturday night without Sunday morning. You’ve got to have some inner reflection. You’ve got to have that honest look in the mirror and say, “Am I choosing to be a decent person, or am I choosing to serve that lower order? Am I choosing to corrupt and corrode?”

You’re also a renegade studio owner now. What are some of the projects you have done, or may have coming up with Rebel Roots Studio?

The first thing I ever did was the last Wayward Drifters album Watch America Roll By in 2009. I did Jayke Orvis’s first record It’s All Been Said, and I did Owen Mays’ first record. Matt Kellie and the Idle Americans. Husky Burnette’s album I engineered, produced, and played bass on. Carolina Still’s album. Man, there’s been a bunch. Me and Buck (Thrailkill) have been staying pretty busy since I’ve been down here. It was sort of a default thing. I had to reconfigure my lineup, I had to take care of some family stuff, I couldn’t tour like the way I had been, so I figured the logical thing was if I can’t do what I’ve been doing for the next year or so, at least not full time, and there’s no work to be had here, you might as well use one of your other skills. And I had been doing recording before I moved to North Carolina, but Buck and I stepped up the workload once I got here because I wasn’t touring as much. So I sort of defaulted into it.