JD Wilkes Will Always Be A Blues Player 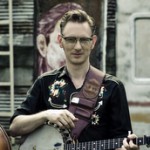 JD Wilkes. The Colonel. Consummate front man. A founding father of underground roots. Genuine throwback. General madman. And most of all, a blues player.

The leader of Th’ Legendary Shack Shakers recently extruded a new musical tentacle into the creative world in the form of The Dirt Daubers, an old-time mountain string band of sorts that he fronts with his lovely wife Jessica. Their album Wake Up, Sinners! I continue to assert is one of the gems of 2011 and foolish to be overlooked. The release of a new video last week for “Get Outta My Way” and a current tour has recently given the project a renewed push.

But with a series of slight disturbances in what for lack of a better term we’ll call the “underground country” movement recently, with some wondering if it has lost its way, or even dying, I asked JD Wilkes being one of the elders for his counsel, and if The Dirt Daubers was his answer to a style of music that needs to mature.

Col. JD Wilkes: I’m not trying to do anything that isn’t just completely natural to where I’m going, my natural inclinations and aging myself. I’m almost 40, and sometimes it’s kind of embarrassing to see someone over 40 rocking out. I started off as a blues harp player. That’s all I am. I like playing blues, and I can play it in a loud band and I can play it in a soft setting. I guess I’m just trying to enjoy both sides of it. The Shack Shakers fulfill a sort of therapeutic function for me. At the same time I’m not getting any younger, and The Dirt Daubers touch base with the roots of what The Shack Shakers is all about. Old country blues, hillbilly blues. That’s what I like to play. I’ll always be a blues player.

I think more people in the mainstream get off on the blues, it informs rock & roll, it informs R&B. Country has a stigma. The twang of country, the Southern accent, Hollywood has done its level best to humiliate us and has created a stigma that you’ll never get beyond. Little, lowly Muddy Roots Festival will never compete against Hollywood, and the onslaught of negative connotations it heaps upon The South and country folks. And plus, it isn’t like it was in the 50’s or 40’s anymore. The reason that pop country is so popular is not because people are so stupid, it’s how the times have gone. We’re a slick, fast food, instant gratification, mini-mall culture now.

The honky tonks are almost ironic, the square dances are ironic. It’s all done in the underground as sort of a joke instead of being a function of the rural people anymore. That’s sad because I’m a nostalgic person.

But here’s the hope: In the same way people are going back to farming, even if it’s hipster ironic farming, at least it’s a start in the right direction. I foresee a return to one room schoolhouses as the public schools crumble. I think the home schoolers will band together and have “old school” school. I could see a rejection of all of this crap by more and more people as the years go by. But it won’t happen overnight unless there’s a cataclysm.

You see irony as things catch on more because it starts to percolate up into an upper higher echelon of people. Hipsters and yuppies will embrace what we do out of irony. We do it for other reasons. We loved our grandparents. We remember what it was like on a farm or in the country, or listening to the music our grandparents listened to. There’s a lot of things we do to romanticize the past. I don’t do it out of irony, I do it because I feel it in my bones. Some people do it to fit in and belong to something, wear a certain badge, have a certain tattoo so they could feel part of a greater whole. And some people are just old souls trapped in young bodies. Some are artists, or people that had a combination of artistic sensibilities, nostalgia, and a certain kind of upbringing.

The Triggerman: In the late 90’s when you started on lower Broadway in Nashville, did you even know what hipster irony was? Here in Austin, TX  it’s an epicenter for hipster culture, but when you start talking about hipsters and irony, some people from the outside looking in are confused, unfamiliar with the term or who it refers to.

Col. JD Wilkes: I consider myself a hipster in a way, I know what’s hip, I know what’s ironic, I know what’s funny. I’m hipster compared to some people, but I’m also from Paducah, KY so I can’t be too hip. But that’s what I’m saying, Austin, TX is one of those places where country music is trickling upwards, to that upper echelon of the gentrified yuppie class. It’s entertaining and ironic for them. But it’s that age old discussion of what makes something campy and what makes something kitchy. Something is campy if you’ve got a tongue and cheek element to it. But if you genuinely like it even if it is campy, is it still campy?

Camp is out of the gay world, the gay movement. John Waters films with pink flamingos, that’s camp. Peewee’s Playhouse. B-52’s is as camp as it gets. But at what point do you say, “Oh I really do like pink flamingos or this old TV set from the 50’s, or this old wallpaper?” I don’t think it’s because I’m a closet gay or anything, maybe I just like stuff from the 50’s? What if that was a better time?

Col. JD Wilkes: Blues will always get you further. It was the blues in all the throwback music resurgences. That was at the heart of it. The rockabilly, the swing revival, O Brother Where Art Thou, it was the blues in there, the country blues at least, it wasn’t necessarily the twang. The Carolina Chocolate Drops are winning Grammy’s now. More people can feel that for some reason. It’s an important sonic invention, the blue notes, it catches your ear. It makes you feel something that the major scale doesn’t always illicit.

But if you’re a white guy, a hillbilly, a Southerner, or whatever, you have to be careful to not come across as a mistral act. Be proud of who you are. Be yourself. That was what the rockabilly acts were best at. They were blues, Elvis was playing the blues, but they were unabashedly white hillbillies. Just “be yourself” no matter what color you are. I like it when black people play country and I like it when white people play blues.

That’s the great thing about America, that’s where the integration starts, in the art and music.