Jim Chilson on Resurrection of the Deep Blues Festival 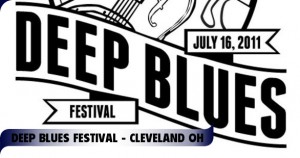 After a one year hiatus, the legendary Deep Blues Festival will be re-emerging this year on July 16th in Cleveland, OH. Deep Blues ran for three years under the vision of Chris Johnson up in Minnesota, but because of financial concerns, had to be discontinued last year. This year the torch has been picked up by Jim Chilson of the blues band the Ten Foot Polecats, Ted from The Scissormen, and others to make sure the legacy of Deep Blues remains alive.

The first three years of the Deep Blues Festival forged a strong music community from both a fan and musician perspective, and was seminal in creating the underground/independent roots movement that exists today. Jim Chilson was kind enough to give me some of his time to talk about why he decided to rekindle the Deep Blues flame, and about the difficulty some blues-based bands find being accepted in the traditional blues music circles.

Jim Chilson: Just for the love of the music of course. Basically we saw a big empty hole when it faded away and there were a lot of disappointed people, and a lot of them were the musicians themselves. Chris Johnson has put together a great festival over the last few years. It gave a home to blues that was not liked in the typical blues circles. It was great to see all these musicians for around the world coming together and discovering each other, as well as the fans coming from all over the world. It’s a big financial burden, as Chris Johnson can tell you himself. He lost quite a bit, and that’s the reason it didn’t happen last year. When I was talking with Ted of The Scissormen about touring this summer and we were trying to figure out some spots and what not, he said “Let’s try to get a festival going.” I said “OK great!” He called Chrish Johnson, asked him if we could use the name and he said “Go for it.”

Triggerman: When you mention blues, your average Joe six pack might think of BB King or Eric Clapton. The blues the Deep Blues Festival was emphasizing was the blues that had fallen through the cracks: the punk-infused blues or the dirty blues. You also had bands like Those Poor Bastards and .357 String Band, bands that if you hear the music, don’t fit intuitively together, but you put them all in one place and they all work together.

Jim Chilson: It’s very open-minded people as far as the music goes. There’s no barriers. If you’re making good music, people like it. The blues societies are a weird thing. They seem to put up these barriers and say “This is blues, this is not.” That’s why it’s nice to see this (Deep Blues Fest), to see people open to whatever you’re creating. Because you could say blues is the first American music. From rock n’ roll to country and bluegrass. So it’s frustrating to see those barriers go up by the blues societies, because it’s infused in everything.

Triggerman: I find it funny that you’re saying certain blues circles don’t really see your music as blues, because I see Ten Foot Polecats as pretty straightforward blues. Maybe you bring a little more energy, but you’ve studied blues, you play on 5 strings, you don’t have a bass player. And you’re trying to cultivate a sound from a very specific part of the country. 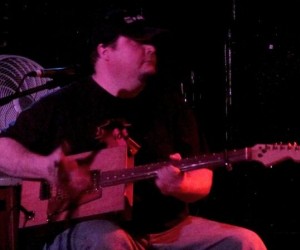 Jim Chilson: Yes, our basis is North Mississippi Hill Country blues, which I think is a lot more open sounding as far a blues goes. It’s groove music. For some people, blues music is a lot of visuals. If you come out and you’re not in your fedora and pin stripped suit, you don’t have a bass player, they don’t think you’re blues.

Triggerman: To me, when it comes to purity in music, the first question I ask is, “Is there a tie to the roots of that music?” If there is a litmus test, that would be it. And if I look at the lineup for the Deep Blues Festival either this year or previous years, that litmus test would be covered by all these bands. And depending on your perspective, you could say some of those bands fit that test better than bands that are more widely popular for playing the blues.

When it was announced that the Deep Blues Festival was no longer going to be happening, I read this quote from MA Litler, a filmmaker out of Germany that has stuck with me on ninebullets.net.

I reckon most visitors of the Deep Blues Festival agree that the masses have a piss poor musical taste and that’s where the problem lies and will forever lie: It’s mostly drivel that sells, and the good stuff gets filed under “obscure”. The little man inside my head tells me that Chris Johnson knew this from the get go and did it all anyway. To me that is more heroic than doing something based on the belief that it will prosper. Like Dylan Thomas, Chris raged against the dying of the light”¦but Chris, folks get what they deserve”¦and they did not deserve Deep Blues.

I found that to be prophetic, about how the most beautiful things in life seem to be taken from us one by one as the years pass by. But I wonder what your perspective is on looking at putting this festival together. Can Deep Blues be an annual event?

Jim Chilson: Everything depends on the fans these days. And there’s a lot of great fans in this scene. To consistently keep this going we need to try to get the word out to more people. I know that’s always the toughest thing to do. Yeah, I’d say we got to go slow, and hopefully we’ll get lucky and something will hit, and make it a great event for all these blues musicians.

Triggerman: Having never been to the Deep Blues Festivals, when I research them, I find above and beyond just the music itself, I find a very deep community that was created from those first three festivals.

Jim Chilson: You hit it on the head. This is a very tight knit community. When you play your set, what happens next is you go down in the crowd and talk to people. Everyone’s together on this.