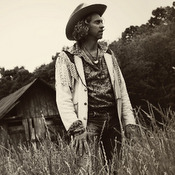 Jimbo Mathus has the authenticity that every other music artist covets. They root through vintage shops in their city’s hipstertown trying to score vintage duds. They spend egregious amounts of money on antique music gear, fiddling with knobs and pedals trying to evoke that right tone. They strike their poses on stage and sing from the gut. And still Jimbo Mathus is cooler and more authentic when he first wakes up in the morning with his hair a mess, standing on an old unswept linoleum floor in his stained paisley boxers, rubbing the eye boogers off his face.

Nothing rivals authenticity, and by definition, nothing can simulate it. Only Jimbo Mathus, whose bones were cast in the mud of Oxford, Mississippi can make authenticity look so effortless, while at his core being a helpless music geek with a fake front tooth and wiry frame wanting to be heard.

Possibly known best as the front man for the legendarily-eclectic Squirrel Nut Zippers, he holds his own against the Brian Setzers and Wayne “The Train” Hancocks of the world when it comes to resurrecting vintage American sounds and presenting them to the present-day ear. Yet with the on again, off again nature of the Zippers, and Jimbo’s propensity to move from blues, to country, to rock as smoothly as a Navy Seal deftly slipping from air, to sea, to land through a theater of battle, Jimbo keeps from being pigeon-holed as the “king” of anything by being and adept at everything. He’s more of a witches brew of influences, where black meets white, country meets blues, and roots meets rock. Mix it all together with some toil and trouble, and the result is a concoction of some mean, potent shit straight out of the filthy American South.

With White Buffalo, Jimbo Mathus captures more sweat in the recording than anything this side of Sticky Fingers. His previous album Confederate Buddha had some remarkable tracks, but like the contrasting characters of its title, the album at times felt like it was searching for its narrative. With White Buffalo, Jimbo and the Tri-State Coalition struck a cohesion that allowed the songs, the players, and the album to be so well-blended, like the edges of all the autonomous parts were melted together until there was no beginning or end. The album not only captures the live sound in the recordings, the recordings sounds alive.

White Buffalo is a journey through the South. And no, not in Jason Aldean’s king cab with air conditioning and buckets seats, but in an old beater with panty hose and coat hangers procured for spare parts. With song titles like “Hatchie Bottom” and “Fake Hex,” you know you’re in for an interesting trip, and you’re glad to have a local as your guide.

The song themes are eternal, and Jimbo’s blue collar approach to songwriting and composition is absorbing. “Hatchie Bottom” speaks about the warmth of home. “In The Garden” and the witchey “Run Devil Run” are infused with the Southern theme of sin. “Tennessee Walker Mare” works like an answer to Jimmie Driftwood’s “Tennessee Stud” covered by so many country greats over the years.

And don’t ask me what is going on in the careening “White Buffalo.” It plays out like the soundtrack to a high speed car case involving a candy apple blue El Camino with bullet holes in the door and a half-naked Catherine Bach stretched out across the bench seat, but apparently it’s about an actual white buffalo named Tukota that lived near Tupelo. As Jimbo explains, he doesn’t have to go too far from home to find compelling themes for his songs.

Jimbo Mathus came up as a neo-traditionalist when grunge was all the rage. Now that roots are all the range, he comes across as a bluesy Southern rocker. In between he’s rubbed elbows and collaborated with Buddy Guy, and the North Mississippi All Stars. In the end it’s not a genre that defines him, but the state of Mississippi, yet his music is a treasure the whole world can appreciate.

Jimbo Mathus and White Buffalo are on Fat Possum Records