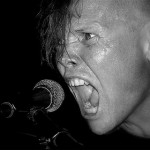 When I went to see Joe Buck a couple of weeks ago in Denton, TX, he was billed as “Hank III’s Bass Player.” Yeah, I know; people need a context to understand why a name on a calendar is something to pay attention to, but Joe Buck is so much more. To the average human with no context to put Joe Buck in, I’m sure he comes across a some degenerate punk musician to be scoffed at. To people who know his music, there is no peer to the amount of energy and passion he brings, and his songwriting reveals great wisdom once you get past the rawness of the presentation.

In my music world, Joe Buck is elevated even one more notch. He is the top elder of underground country punk. No other living musician can be slotted above him in that pyramid. Underground country punk can be traced back a few ways, but the main one leads to lower Broadway in Nashville, in the early 90’s. At that point The Ryman was shuttered and empty, Tootsie’s Orchid Lounge had bums living in it, and the few blighted honky tonks were hidden between dirty bookstores. Now it is completely revitalized, and maybe over-revitalized to the point where it is cartoonish, the “Disney” version of Nashville according to some, including Joe Buck.

The turnaround story for downtown Nashville doesn’t involve acts of government. Lower Broadway was revitalized by music, and specifically, the music that was the precursor to the music we listen to, and talk about on this site. Mainstream fans will sometimes put down this music as “obscure” or “irrelevant.” Toby Keith and Tim McGraw didn’t revitalize the most historic part of Nashville. It was a bunch of punk kids from all around the country, who moved to lower Broadway to walk the same streets Hank Williams walked. At the time there was a saying: “The older you sound, the more punk you’re being.” 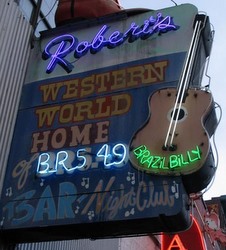 Joe Buck started as a street performer, then started playing Robert’s Western World, which bills on its sign “Home of BR549.” Then Robert opened “The Bluegrass Inn” next door, later giving it to Joe and his then partner Layla, and Joe Buck was billed the “BR549 of the Bluegrass Inn.” Those two venues shot life into lower Broadway. Next thing you know more venues opened up. They reopened Tootsie’s and The Ryman. Then they’re building hockey stadiums and convention centers. The music saved downtown Nashville. Only a few years removed, the city has already forgotten that.

But I haven’t. Joe Buck and a few others deserve keys to the city for their contribution. I’ve been working on putting a chronology together of the lower Broadway rebirth, doing interviews with the different artists involved. Joe Buck is always reluctant to talk positively about it. He’s always looking forward, and as he puts bluntly, all of that is dead. Country is dead. Lower Broadway is dead; exploited and nothing like it used to be.

I got him to talk a little about it though, and other things, like his falling out with Century Media, how he’s still working with Jack Endino, life on the road, the driving habits of America. Below you’ll find the newsworthy items of the interview transcribed, but for the true music nerds, you can listen to the rest below, taped in Joe Buck’s new Sprinter motorhome. (AC and generator supplied the humming ambiance).

A lot of people don’t classify Joe Buck as country. I think he is more country than country; that he is what country might have been if its evolution had not been cut off by corporate interests. When I saw him this last time, he started his set with three acoustic straightforward country covers, and played a few more before the end.

I didn’t do any production on this interview like my last Joe Buck interview, this is just the raw feed.

Triggerman: Last time I talked to you, we kinda broke the news that you had been signed to Century Media, and you were going to be working with Jack Endino.

Joe Buck: I was going to be. I recorded with Jack, that’s my new record. They got real flaky. There was money issues. I don’t think they can do anything for me. Record labels don’t even exist anymore hardly. I mean its like what’s the point? Take the music, it’s free. The minute you put something out, it’s free, you can get it. So they got no way to capitalize on it.

Triggerman: So you got an EP, and you recorded some more stuff after, you went back up to Seattle, right?

Joe Buck: Right. So there’s a full length, and there’s like my little EP that I made 500 of. I’ve got a few of those left. I made just what I needed to get the record out there. I was just going to give it away and people told me I was stupid. My people buy all this shit anyway when they come to the shows, even though they’ve already got it.

Triggerman: That’s the difference between the average spoon-fed fan and the people who are music people. There’s all this debate that the reason the music industry is going down the tubes is because everyone is stealing music, and that’s probably part of the problem. But the other part of the problem is their products sucks and that’s why people want to steal it. But if I appreciate something, I’m gonna go and give him money, even if I stole it off the internet two months ago, I’m gonna buy the physical product just so Joe Buck can get down the road.

Joe Buck: I tour almost more than anybody. Collectively I play for as many people as big bands, because I do 5 times as many shows. That to the industry, a lifetime of work has done me dick because they have not a clue whats fucking going on. Who fucking cares, why do I give a fuck if those motherfuckers validate me? The people do it every night.

Triggerman: You said to me when you signed with Century Media, you said that the guy that you talked to said, “You don’t need us, we need you.”

Joe Buck: He did. And that was my buddy. And he doesn’t work for Century Media now. That’s where things went weird.

Triggerman: I’ve been trying to put together some sort of chronology for the revitalization of lower Broadway in Nashville. I’ve talked to a few other people, I never think I appreciated the scope of what happened in the mid 90’s, with you and BR549. How did you get The Bluegrass Inn?

Joe Buck: Me & Layla were together. We lived with Robert, who had Robert’s Western World. Because I played all those Stanley Brothers songs (at Roberts), Toby (the owner of the building that Robert’s and The Bluegrass Inn) bought the name of The Bluegrass Inn which had been around the corner, the name had been around forever but they bought that name, and opened The Bluegrass Inn, with the star attraction Joe Buck. I was supposed to be the BR549 of that club. About a year later, Robert wanted to go to California, and we got the bar. Rented it, and it’s still rented.

Triggerman: Who’d you start booking there?

Another gem from the interview:

Joe Buck: They’re (some country bands) worse than Nashville, going “I’M COUNTRY! I’M COUNTRY!” You don’t need to tell anyone that if you’re country. I don’t believe in what people are doing, they’re trying to catch on to what Shelton was doing. Completely misguided, now you got a bunch of people putting their accent on, and its like, I find that more offensive than Toby Keith. At least he’s brazen about what he’s doing. That’s why all of my records are straight ahead. It’s like “there’s lots of bluegrass going around.” I’m like there’s no bluegrass. Fuckin’ hipsters, you know. “We’ll play banjo, except we won’t really learn how to play, we’ll just hold them. Oh man, the olden days.” It’s 2010, shit is so fucked up, you should have 20 stacks of Marshalls trying to destroy everything in your path.

Triggerman: So you’re not a fan of Old Crow Medicine Show?

Joe Buck: I was about 10 or 15 years ago when they first came to town. Might as well be a boy band now.