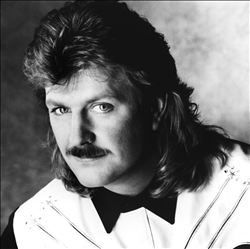 Did you feel that Oklahoma? That was the earth tremor caused by your native son Joe Diffie selling out so violently it measured 2.1 on the Richter scale.

Listen, Joe Diffie. Seriously man, I hate to break it to you, but Jason Aldean has no idea who the hell you are. And neither does his body spray-drenched Tap Out T shirt-wearing corporate country fan base. Aldean is just reading lyrics off of a teleprompter, waiting for the concert to end so he can get down to his real passion: plowing through the line of 20-year-olds waiting backstage to give him hummers.

Just sit back and appreciate this folks: These two dudes are releasing tribute songs to each other, yet they’re not friends, they’ve never met, or even conversed according to reports. There was speculation that Aldean and Diffie would share the stage at the ACM Awards in April where Aldean was scheduled to perform “1994,” but nothing came to pass. They spent the effort to erect this…

…yet couldn’t pony up for a Fun Fare on Southwest Airlines to get ol’ Diffie and his mustache to be part of the presentation.

How much money has this Joe Diffie song made Jason Aldean, yet Jason is too busy getting fitted with wallet chains and having his jean pockets embroidered with glitter thread to call Joe on the damn phone? Aldean told radio station 107.7 GNA when asked if he’d ever talked to Diffie, “No. My booking agent Kevin Neal who is a mutual friend of ours, I think he’s talked to him. But I haven’t actually talked to Joe yet.”

Aldean thinks that maybe a mutual friend talked to Joe? What the hell is all this Joe Diffie, “1994” nonsense about then? You’ll tribute the man in song, but won’t shoot him a text message? Is it because Aldean isn’t paying tribute to Joe, his mullet, his mustache, his pudgy face, or his paltry singles catalog that they pilfered for “1994” lyrics, he’s actually making fun of it? Maybe Joe Diffie is the jester for their little modern-era, ultra-ironic, making-fun-of-country-music’s-past radio hit, not the king.

And so what does Joe Diffie do about it? Does he bow up? No, he jumps on the bandwagon and begins riding this wave of shitty music and anachronistic fallacy to its fatalistic end by releasing his own country rap song, and with all people, the absolute toilet hole of musical expression, the creatively bankrupt and bottomfeeding D. Thrash from the Jawga Boyz. What, were Colt Ford and The Moonshine Bandits too busy bankrupting a Chinese buffet? No, like Aldean, they didn’t answer Diffie’s calls because they knew this would turn out to be an embarrassment. 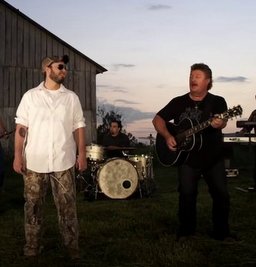 Using anything touched by the Jawga Boyz for anything other than removing the result of a bowel movement from your backside is the textbook definition of “slumming.” They are the music equivalent of a bright yellow XXXL Tweety Bird T shirt from Wal-Mart with dried spaghetti caked on the front.

The beats for “Girl Ridin’ Shotgun” sound like they were composed by a 7th grader who just snorted his ADD meds, just like all of the beats of the Jawga Boyz’s bombastic and trashy tracks. The beat doesn’t even get five seconds into the song without going off meter. There’s biscuit crumbs in Joe Diffie’s mustache that could compose a better beat. And then D Thrash’s first line doesn’t even rhyme. Are you effing serious with this song? “Girl Ridin’ Shotgun” makes me want to make out with my cousin and bet on a dog fight.

The video for “Girl Ridin’ Shotgun” meets the demands of the song by being completely devoid of substance, theme, intelligence, or creative expression. Instead we get trucks, chicks, mud, and hot rods, like we haven’t seen this same idiotic shit used over and over.

And the saddest thing for poor old Joe Diffie is that “1994” has already petered off the country music charts, and never really mounted much of a charge to begin with. It was too awful, too transparent, and Joe Diffie too much of an unknown quantity to the mainstream country listener for it to hold anyone’s attention. So even though Diffie heard the song and got dollar signs in his eyes and delusions of a big career comeback, “Girl Ridin’ Shotgun” will be confined to a narrowcasted YouTube phenomenon (just like the rest of the Jawga Boyz’s songs), appealing only to poor white rural folks who’ve cast off their indigenous culture to take part in corporate cultural front running, and curiosity seekers looking for comedic relief.

Sorry Joe. I’ll still go to bat for you and say who had a few cool songs back in the 90’s, and that your bluegrass album wasn’t half bad, and neither is your chorus for this song. But country rap, and the Jawga Boyz? This is a prayer for relevancy guaranteed to go unanswered.