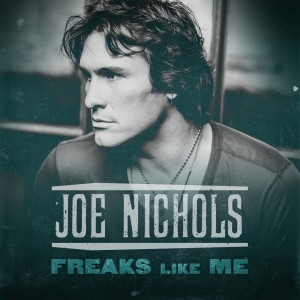 Joe Nichols is fed up with all of the country music that doesn’t sound country and says the same things over and over dammit, and he’s aiming to do something about it. You know . . . like release a song that references the same things all the others songs he’s complaining about do.

I guess the good news is Joe Nichols isn’t breaking out in three piece suits and doing his best Bruno Mars impression like many of his compadres in mainstream country. Such are the little victories we have to celebrate these days when we get them. But his new single and the rhetoric surrounding it is a little confounding. Joe Nichols has always been sort of a dichotomy, yet one who veered much farther towards the traditional side of country, yet would compromise when asked to release a big radio single to sell albums. With “Freaks Like Me,” it appears he’s trying to do both.

“The more traditional you get, the more pushing the envelope you are,” Nichols told Rolling Stone recently. “Here I am being a bit of a freak by doing something that was completely normal 20 years ago. We’ve gotten in a rut with the same lyrics over and over again. People are starting to scratch for more authenticity. It’s not style; it’s good vs. bad. Quality vs. crap.”

However in the next breath, Nichols is saying things like, “You want to find the balance between art and commerce.”

“If I could just make the record I wanted to make, I’d hire the countriest guys in Nashville. Kenny Sears, Opry members, the Time Jumpers. Maybe Vince Gill to come sing. And we’d make a country record that probably wouldn’t get sold at all. Lots of twin fiddles, steel guitars, country shuffles and western swing. If there are enough people to sign the petition, I’m all for it. And I would love to. But I’m not that rich.”

So you have to be rich to make a country album that sounds country? Boy I know of a hundred or so bands and artists that would beg to differ, including some that are selling lots of records these days—actually more records than many of their mainstream counterparts. I didn’t know Joe Nichols was so hard up for cash. Someone set him up with a Go Fund Me campaign maybe.

This all points to an underlying reason why most mainstream music artists can’t make the music they want to. It also explains why so many artists are now going with drum machines and synthesizers to fill out the production of their songs: it’s cheaper than session musicians. Though we may not like what Joe Nichols is saying, at least he’s being honest about his motivations.

Released ahead of his TBD ninth album, “Freaks Like Me” is a fairly country, but unmistakably checklist song that does exactly what Nichols complained about above, which is list off things such as cold beer, six packs, 4X4’s, blue jeans, boots, Jesus, and the good ol’ USA. I mean, it’s “the same lyrics over and over again,” to quote Nichols himself, but he somehow believes he’s sanctified because he calls himself a “freak” for still holding to these country things in the contemporary world. Either Nichols has been living under a rock, or he’s trying to pull the wool over our eyes.

What sucks is that “Freaks Like Me” really isn’t a bad song. It’s a shame that country fans have been so brow beaten by these Bro-Country laundry list songs for so many years that as soon as you hear the six pack reference your eyes set to rolling, but that’s just the way it is. These things are super worn out and clichÃ©, and all the buzzwords employed in “Freaks Like Me” must be used sparingly if you expect your song to appeal to the same crowd as Kenny Sears, Vince Gill, and the Time Jumpers.

And it sucks because I do think Nichols is hitting on something with the sentiment of this song. His voice sounds great here, and the song is a pretty agreeable listen overall. There’s some good twang to the Telecaster, and a decent melody. I just don’t appreciate the way he’s singing out of both sides of his mouth, because despite the title, “Freaks Like Me” is totally trying for attention from the in-crowd.

If Joe Nichols really wants to play country shuffles and Western Swing, then dammit, just do it and figure out how to make it work. Otherwise you’re just stuck halfway between two worlds: destined to fail in the mainstream, and to let your country fans down.

ONE GUN UP for a good underlying message and solid music.

ONE GUN DOWN for clichÃ© checklist lyrics, especially after criticizing that very thing.