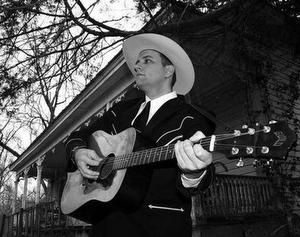 Country music throwback Joey Allcorn, known for his classic style and appreciation for traditional country, is putting together a benefit album for the Hank Williams Museum in Montgomery, AL. Also slated to appear on the album are the Queen of Underground Country, Rachel Brooke, Jake Penrod, David Church, Arty Hill, Andy Norman, and Bobby Tomberlin.

This will not be your usual artist tribute album that includes covers of original songs of the artist being paid tribute to. Instead the project with the working title of Midnight: The Death of Hank Williams will focus more on songs that touch on Hank’s final days and death, and on the other people that surround the Hank Williams death narrative, including Braxton Schuffert, one of Hank’s very first musical mentors, and Charles Carr, the driver for Hank Williams on his famous last ride, and the last person to see Hank Williams alive. Both men passed away earlier this year. Bobby Tomberlin and Arty Hill’s contributions to the project are tribute songs to Charles Carr for example. Braxton Schuffert’s “Rockin’ Chair Daddy” will also be on the album, as well as “Midnight,” which was the last song ever sung by Hank.

As Joey Allcorn explains, the death of Charles Carr, and the very first tribute song ever written to Hank Williams is what inspired the project.

“I stopped by the museum after Charles Carr had died, and they had the lyrics in there to an old song by Jack Cardwell called ‘The Death of Hank Williams.’ “ Allcorn explains. “This is a song that is available now on iTunes, but before iTunes, you couldn’t find this song anywhere. To me it was an interesting song because it was the very first Hank Williams tribute. Nowadays, doing a Hank Williams tribute is just sort of par for the course. This particular song that we’re centering the project around, it just captures a very basic feeling that happens after some sort of tragic event. The lyrics that are on display [in the museum] tell a similar story, because it was a woman in Montgomery who heard the words on the radio as a child, and they meant so much to her that she wrote them down. If you go to the Hank museum, they’re still sitting there by Hank’s Cadillac. It’s the handwritten lyrics of this little girl wrote after hearing this song, and when she was upset or sad. 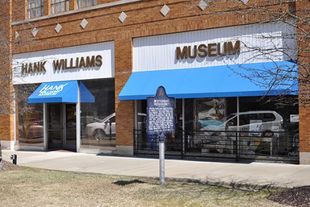 “So then I had the idea that it would be fun to record that song. I really don’t want to put it on one of my records. I don’t feel like it would fit in. But then I thought I could do it for the museum, and do it as a fundraiser. So I called Beth Petty [at the Hank Williams Museum] and she said that was great because everyone that comes in the museum and reads those lyrics asks where they can get that song on a CD. And the answer is, ‘Nowhere.'”

Joey Allcorn goes on to explain that this benefit album is being released at the nexus of some very important Hank anniversaries.

“This year marks 60 years since Hank’s death and 90 years since his birth. And this year we lost Braxton Schufert who was one of Hank’s mentors, and Charles Carr who was the last person to ever see Hank Williams alive. And the song that me and Rachel [Brooke] are going to do is “Death Is Only A Dream,” which is a really obscure, old Gospel song that Hank said was one of his favorite songs in one of his last interviews. It’s kind of a way to expose the songs within the Hank Williams canon for people who may have not studied it to that level.”

Joey Allcorn has launched a $4,000 indiegogo campaign to help pay for the costs of the tribute album, with the incentives coming from the Hank Williams Museum that the album is going to benefit.

“Every penny of it is going to go to the Hank Williams Museum. The museum is going to be the only place you can get the CD. We’re not going to put it on iTunes or anything like that. You actually have to order it from the museum. I think that crowd funding is a fantastic avenue for projects like this. Personally, I would not want to fund one of my albums this way because I made the choice to be an artist and a singer, and therefore it is my responsibility to find ways to fund my career. I hate to say that because it sounds very disparaging of people that do that, and I understand that not everybody has avenues to get private funding for their albums or whatnot. But to me it seems a lot more honest of a venture if its going to a cause as opposed to an individual.”