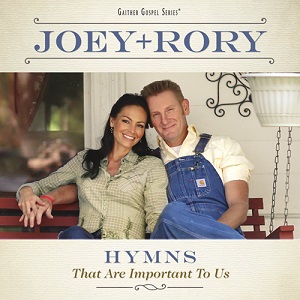 Despite losing last week at the Grammy Awards, despite numerous winners and performers in country music receiving Grammy bumps for their efforts, it isn’t Little Big Town or Chris Stapleton walking away with the #1 album in country this week, it is a traditional country duo recording traditional hymns that takes the week’s top spot.

Hymns (That Are Important To Us) by Joey + Rory sold a surprising 70,000 albums, and 68,000 “pure” albums sales (meaning not taking streaming into account) to become the latest independent country act to land a #1 record on Billboard‘s Country Albums chart. The numbers are also good enough to land the #1 spot on the Top Christian Albums chart, and #4 on the all-genre Billboard 200 chart—the duo’s first Top 10 or Top 5 showing on the chart ever.

The push was enough to dethrone Chris Stapleton at the top of the albums chart where he’s been ensconced for 12 weeks since the CMA Awards in November. Despite a Grammy boost of 60%, and selling 51,000 additional copies of his debut Traveller due to big wins for Best Country Album and Best Country Solo Performance, it wasn’t enough to top Joey + Rory.

The distinction for Joey + Rory comes as Joey Martin Feek lays in a bed at her home in Indiana in the final stages of hospice care. Feek was first diagnosed with cervical Cancer shortly after the birth of the couple’s daughter Indiana in June of 2014. Joey Feek decided to cease her Cancer treatment after receiving a terminal diagnosis in October. Despite Joey’s health continuing to weaken, she has survived to celebrate numerous milestones with her family, including another Valentine’s Day, the release of Hymns, the Grammy Awards where Joey + Rory were nominated for Best Country Duo/Group Performance for their song “If I Needed You,” the recent birthday of their daughter Indiana, and now their first #1 record.

And along for the ride has been fans of country music and beyond, who have found infinite inspiration, hope, and wisdom through the Joey Feek story.

Chris Stapleton, Hymns, Hymns That Are Important To Us, Joey + Rory