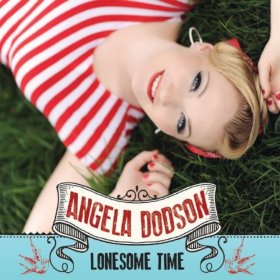 If country music is ever going to be saved, it is going to take people with true passion for the music tugging at the yoke, willing to do whatever it takes on and off the stage in the name of preserving the music and paying it forward.

One such passionate young lady doing her part is songwriter and performer Angela Dodson. Originally from rural Pennsylvania and now living in Nashville, Dodson released a dazzling debut EP in 2013 called Lonesome Time that was recorded at the legendary Cash Cabin Studios, executive produced by John Carter Cash, and also features “Cousin” Kenny Vaughan on guitar, and Chuck Turner as co-producer.

What’s even more interesting is that this country music crime fighter by night spends her days employing her passion for all things country music and Johnny Cash as the Event Center Manager at the new, highly lauded Johnny Cash Museum in Nashville. It was this double duty passion that told me I must reach out to this young artist and delve into what makes her tick.

So you recorded your EP Lonesome Time at the Johnny Cash Cabin, with John Carter Cash as the Executive Producer, the first song is one you wrote called “They Called Him Cash”, and you work at the Johnny Cash Museum. Is it safe to say to have a little thing for Johnny Cash?

Yes, I would say that is very safe to say! I grew up listening to all the classic country artists – Hank Williams, Patsy Cline, Johnny Horton, and Johnny Cash, among others, but I really started delving deep into Johnny Cash’s huge discography around 2005. I was hooked and he continues to be such an inspiration to me. It is amazing how one person I never had the opportunity to meet has affected my life in so many ways.

I grew up listening to and loving Elvis Presley and Jerry Lee Lewis along with the classic country greats.  As I got older, I started listening to more female rockabilly artists, including my two favorites, Wanda Jackson and Janis Martin. I was very influenced by their energy and vocal stylings.

How was it working with guys like Chuck Turner and “Cousin” Kenny Vaughn on the EP?

Amazing. I can’t say enough good things about everyone I worked with on this EP.  Kenny Vaughan and Chuck Turner are both very talented guys. Chuck won a Grammy for his work on June Carter Cash’s Press On album, yet he is the most humble, laid back, welcoming person you’ll ever have the pleasure to meet.  The entire vibe at the Cash Cabin Studio is very comfortable and casual. It’s like recording in your living room. Plus, you walk outside and you’re surrounded by all this quiet, beautiful landscape. It’s a great place to be creative.

In addition to our Museum, we also have a beautiful new event space where we can hold social events, corporate events, weddings, receptions, artist showcases, and more. As Event Center Manager, I am the point of contact for people interested in having an event at the Event Center and Museum. Can you imagine a cooler place to hold an album release party or to have a wedding reception if you are a Johnny Cash fan?

We also do events throughout the year to celebrate Johnny’s life, like the three day birthday bash we held at the end of February, where we were joined by lots of Johnny’s family, friends, past band members, and fans. It was a great time.

What is your favorite part about the new Johnny Cash Museum? What is something unexpected people might take away from it?

My favorite part about The Johnny Cash Museum? The sincerity with which it was created and continues to be run. The founder, Bill Miller, was a close personal friend of Johnny’s for over 30 years and created the museum simply out of his love for the man.

Something  unexpected people might take away from the museum is that Johnny Cash was not always the hardened, rebellious outlaw he was often portrayed as. Yes, he was without a doubt rebellious at times, but Johnny Cash was also a kind man who cared deeply about and made time for friends and fans. He was well-read, intelligent, had a strong sense of faith, and was a pretty funny guy on top of all that. When you walk through the museum and see all his hand written letters and other artifacts, you really get a sense of all the complex facets of Cash’s personality and life.

Any plans to release a full length album?

Absolutely. This EP was a great starting point for me to put my music on the map, and so far, I have had the honor of being nominated for Best Female Rockabilly Artist in the recent Ameripolitan Awards, being featured in various Vintage/Rockabilly style magazines, including the upcoming April issue of Vintage Life Magazine, and now of course, getting to do this interview with my favorite crusader for the preservation of country music!  I don’t have a set date for a full album release right now, but it is definitely in my plans.