To hear the warm, familiar voice of a legendary country music great again here so many years after they have unfortunately passed on in a new, unreleased and unheard song is a gift from the country music heavens hard to put a true measure on. But to hear two of those legendary voices come back to life, and together no less, is downright country music divinity.

Between 1981 and 1984, Johnny Cash recorded an album with the legendary Hall of Fame producer Billy Sherrill called Out Among The Stars that was subsequently shelved by Columbia Records and lost to the world until the masters were recently discovered during a search for archival Cash material by Johnny Cash’s son, John Carter Cash. The album in its entirety will be released on March 25th, but ahead of the release we’ve been bestowed a prelude track— a duet of Johnny Cash with Outlaw country legend Waylon Jennings, breathing new life into the Hank Snow-penned train tune “I’m Movin’ On.” A version of “She Used To Love Me A Lot” was also released from the album in mid January. 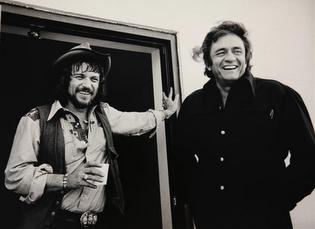 Beyond the track itself, the archivists were gracious and wise enough to leave some of the studio banter hanging onto the beginning of the recording, really helping to re-evoke the the warmth that Johnny Cash could bring to a room, disarming the studio with laughter to make sure a relaxed take would make it on tape. The track itself is a cooking little tune, just as much in the period style of Waylon as it is Cash, with a half-time hitch in the middle of the song for character, and some great backing instrumentation.

Hall of Famer Hargus “Pig” Robbins can be heard laying down a piano bed, and though Nashville A-Team studio guitarist Jerry Kennedy likely makes a heavy appearance on the track, I could swear in the second guitar solo I hear the signature styling of Marty Stuart, who was there for the original sessions, and is one of the musicians along with Buddy Miller who helped “fortify” the tracks for this unique release.

This is no world-beater, but it was likely meant to be the up-tempo change in the album and performs this task admirably. Really, Waylon and Cash could both throw a pair of their dirty jockeys in the middle of the studio and we’d probably think it sounded like genius just from the virtue of hearing their voices again. From sharing an apartment together in the 60’s, to having heart surgery at the same time and in the same hospital in the 80’s, to bookending the legendary Highwaymen into the 90’s, there’s just something right about these two men in tandem.