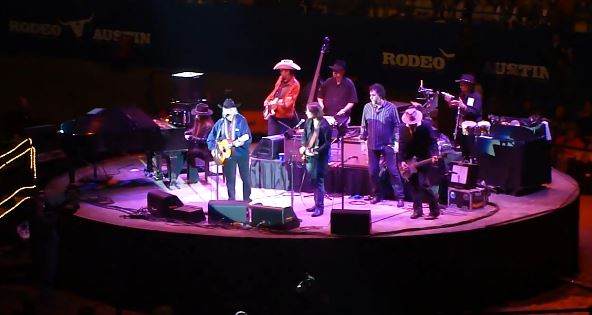 This week in Austin, TX is one of the greatest confluences of talent that occurs annually, as stars of music and film converge on the Texas state capitol for festivities surrounding SXSW, or South by Southwest. Some people forget though that early March is also the time for Austin’s famous rodeo that features many big names in country music stopping in for performances, including Willie Nelson that graced the Austin rodeo stage Sunday night, and had a surprise band member with him incognito.

Actor, music lover, and armchair musician Johnny Depp, sporting a vest, round shades, a ripped canvas wide-brimmed hat, and his Danelectro guitar, sat in with Willie’s family band for the set Sunday night. He was simply introduced as “John,” and traded licks with Willie Nelson’s son Lukas Nelson who was also sitting in with the band. Johnny played songs like “Good Hearted Woman” and “On The Road Again,” with most of the crowd unbeknownst who that was on the right of the stage.

As a guitar player, Johnny Depp is no slouch. He’s buddies with The Pogues frontman Shane MacGowan and appears on the singer’s first solo record. Depp also appears on numerous songs from Oasis, and was a member of the band ‘P’ that featured members of The Butthole Surfers, The Sex Pistols, and Red Hot Chili Peppers. He’s also appeared many times in movies and video playing guitar, contributed to many other songs and albums, and used to own The Viper Room music venue in L.A where Johnny Cash kicked off his American Recordings era.