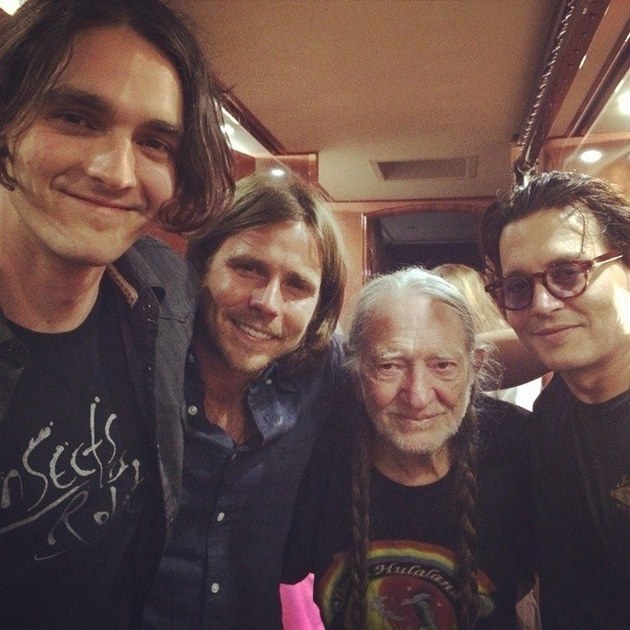 The Johnny Depp addition to the band was not officially announced to the Boston crowd. Depp was simply introduced as “Johnny”, with the attendees left to deduce that it was indeed the silver screen actor on stage. This wasn’t the first time Depp has stepped into a spot in Willie’s Family Band. He also appeared with Willie Nelson at the Austin Rodeo on March 9th during the city’s South by Southwest festivities. On that occasion, Depp was just introduced as “John”, and the majority of the rodeo crowd went unbeknownst of who they were watching with Willie.

Despite being known mostly as an actor, Johnny Depp is an accomplished guitarist. He appears on numerous songs from the British band Oasis, played on the first solo record from The Pogues front man Shane MacGowan, and was a member of the band ‘P’ that featured members of The Butthole Surfers, The Sex Pistols, and Red Hot Chili Peppers. Depp has also played with many other artists and bands, has been seen in many of his movies playing guitar, and previously owned The Viper Room music venue in L.A where Johnny Cash kicked off his American Recordings era.

When Johnny Depp appeared with Willie in Austin, it had all the earmarks of a one-off special occasion. After his Boston appearance, the Willie/Depp duo looks to mark a deeper friendship, and something Willie Nelson concertgoers should look out for next time they see the 81-year-old performer live.

Johnny Depp, laying down a blues lick during the show: