You might be surprised to learn that Jackass mastermind and actor Johnny Knoxville is a big fan of underground / outlaw country music. Not only that, at times he’s gone out of his way to lend his name to helping out specific artists and causes. When you start poking around a bit, it’s amazing where his name pops up in conjunction with different country music projects. Here’s a list of some of them:

Johnny Knoxville’s cousin is country singer/songwriter Roger Allan Wade. Far from being a distant cousin of Johnny who materialized out of thin air when Jackass got big to leach off of the fame, Roger Allan Wade has skins on the wall of his own, and actually Knoxville credits his cousin for getting him into acting when he gave him a copy of Jack Kerouac’s novel On the Road.

To help support his cousin, Knoxville started “Johnny Knoxville Records,” an independent record label. At the moment Roger Allan Wade is the only artist on this label, but don’t be surprised if you hear this label mentioned with other artists in the future.

Johnny Knoxville has also worked as a video and movie producer. Knoxville worked with country legend and anti-Nashville spitfire Dale Watson, putting together a video for his song “Hollywood Hillbilly:”

He also did a great interview with Dale on Jackass World world that you can watch in its entirety (and it’s worth it) HERE.

“I got up there and basically wrote 10 songs in three days. At first, I was adamant about not writing anything even remotely reminiscent to Johnny Cash as I figured I’d be instantly dismissed for trying to cop his vibe, but his presence was so strong up there that I decided, ‘Why fight it? Let the chips fall where they may and go with the feeling.”

Johnny Knoxville is currently bankrolling and producing a documentary about Boone County, West Virgina’s Dancing Outlaw Jesco White called “The Wild and Wonderful Whites of West Virginia.” Not much is known about the project just yet, except that it is slated to be released on MTV, and has been called “the end of documentary filmmaking as we know it.”

Hank Williams Jr. and Hank III have some sort of relationship to this project, and of course Jesco appeared on III’s album Straight to Hell.

Johnny Knoxville also played Gram Parson’s road manager Phil Kaufman, in the 2003 movie Grand Theft Parsons. It is based on the true story of Phil Kaufman stealing Gram Parson’s body to burn it in Joshua Tree as he’d promised Gram he would do. 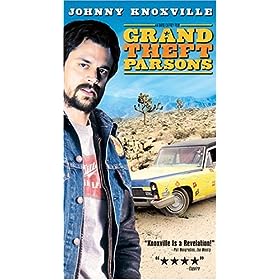