**Editor’s Note: David Macias is the President of Thirty Tigers: the marketing and distribution company that handles the music for artists such as Sturgill Simpson, Jason Isbell, Aaron Watson, Lucinda Williams, Ray Wylie Hubbard, and many more. Jon Hensley, the manager for Shooter Jennings and Wanda Jackson who unexpectedly passed away on Monday June 1st, was a former employee of Thirty Tigers. David reached out to Saving Country Music to post a remembrance of Jon as he travels to Kentucky to attend his funeral.

Funeral services for Hensley are occurring at 1:00PM at Tucker Funeral Home in Central City, with Rev. Justin Latham officiating. Burial will be in Eades Cemetery in Greenville. Online condolences may be made at www.tuckerfuneralhomes.com.

On today, the day we say goodbye to Jon Hensley, I wanted to write a few words on why Jon inspired such passionate devotion. I worry that the controversy surrounding the publication of the news of his passing on this site overshadows the man, and that would be an immense disservice to his memory. Reading the comments, it’s clear that many of you did not have the chance to know him. I was one of the fortunate ones that did. Let me tell you why so many people loved him so ardently. 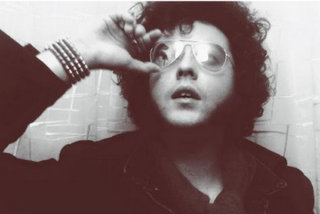 I write this as someone that Jon was on the outs with when he passed. Maybe in the same way that some felt Saving Country Music was an inappropriate forum for the news of his passing, maybe they’ll feel it’s not appropriate for me to write this. But fuck it: I want people to know who this man was. Though having recently experienced firsthand the downside of his passionate nature, for ten years, I basked in the glow of the upside of that passion. When you were loved by Jon Hensley, you were LOVED. As with many whose passion burns so bright, the pendulum often swings the other direction. He could hate large too. One of the things I didn’t care for about Jon was that he could be extremely judgmental about others, but could be vicious in retaliating when others judged the people he loved harshly. Let the first among us without sin”¦.

But when you were LOVED by Jon, he would do anything for you. In the entire time that he was managing artists, I NEVER, NOT ONCE heard him express any sentiment about personal enrichment or anything that didn’t put what was best for his artists first. He would step over a briefcase of money without hesitation if he felt it would compromise his artist in any way. And he wanted his artists to succeed so badly. I remember a very late night (possibly drunken) call from him where he was very upset that he felt that he was letting Shooter down in some way. I assured him he wasn’t, but for those of you not in the music industry, there aren’t that many in this business that would stay up past midnight, losing sleep that they were failing to serve their artist in the best possible way. He cared so deeply.

The seeds of our estrangement came when I asked him to join my company. I admired the passion and dedication to service to his artists that was beyond evident. I want people like that around me and my company. In turn, I felt that we could help him focus his passions in more productive ways. It was like trying to lasso the sun, and to be fair, he warned me coming in that it might be that way. It wasn’t a good fit, but in the parting, I wish that I had handled certain things differently. Maybe he felt the same way and maybe he didn’t, but we never got around to getting to have that discussion. I wish that I had done what I thought about doing so many times, texting him to say that I was sorry for my part in the rift and that it was his friendship that mattered above all else. Now I won’t have that chance. I’m certain that there’s a life lesson in there. But I don’t care about that right now. I would forgo a jukebox full of life lessons just to have my friend back.

But the main reason I am writing this is that I feel that Jon is being mischaracterized and misunderstood, not by Saving Country Music, but by the commenters who are reacting to those that are grieving deeply and being understandably protective of the memory of a person that will never, ever be replaced. A person that inspired the love of someone as wonderful, cool and intelligent as Mary Sparr, a person that was the devoted best friend to Shooter Jennings, who whatever you think of his music (personally, I’m a fan) is one of the finest human beings you could hope to meet, a person that was loved and valued by Wendell and Wanda Jackson and so many others”¦.that person had to have something special about them, and Jon absolutely did.

Back to that sun analogy….it’s an overused clichÃ© when someone leaves us too soon to say that “they shown like the sun.” But Jon was very much like the sun. He was so warm. He was so bright. If you got crossways with him, you could end up blistered and singed. And he absolutely the center of his solar system.

National publications may never write about him. I’m thankful that, despite their differences, Saving Country Music recognized that Jon was an important figure. It may have just been in our overlooked, sawdust covered corner of the world, but he was someone that mattered. He mattered as a figure in the music business community, he mattered as a devoted friend to those he loved.

He was one of a kind. Truly. And I can’t get my head around the fact that he’s gone.

**Note on comments: Because today is the day of remembrance for Jon Hensley, and because of the nature of this post, commenters are charged with keeping comments respectful and positive. Otherwise they could be subject to edit or deletion. Thank you for your understanding and cooperation.