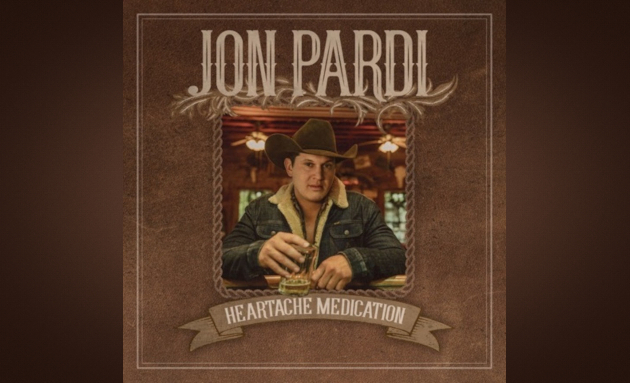 You’ll have to wait all the way until September 27th to hear Jon Pardi’s new record Heartache Medication in its entirety. But we now have the track list, cover art, and songwriting contributors for the new record, and there’s a lot of interesting stuff to unpack.

Along with Pardi himself co-writing eight of the fourteen tracks of Heartache Medication, other notable songwriting contributors include the legendary Dean Dillon, know for his expansive work with George Strait, Jeff Hyde who is a regular contributor for Eric Church, Highwoman Natalie Hemby, Josh Thompson, and Eric Church and Miranda Lambert contributing on the same song called “Don’t Blame It On Whiskey,” which Pardi sings with Lauren Alaina. Remember a few years back, Eric Church made a crack about performers coming from the singing competition world, and Miranda snapped back. It appears now amends have been made.

Jon Pardi co-produced Heartache Medication for Capitol Nashville, with co-producer Bart Butler returning to work with Pardi, and Ryan Gore also joining to co-produce. The title track and first single from the record has already been received well (listen below), and will be released to country radio as a single on June 3rd.

“I named it ‘Heartache Medication’ because it talks about sad topics, but it makes you feel good at the same time,” Jon Pardi said in a press conference on Wednesday from his barn in Nashville. “I’m really proud of it. I’m really proud of all the session players, the songwriters that delivered great songs. I wrote half the record and Nashville stepped in and wrote the other half, and I’m very proud of that. I think everybody’s going to love it.”

Universal Music Group Nashville chairman and CEO Mike Dungan said that Jon Pardi stressed a lot over the making of the new record and how to follow up the surprising and under-reported success of his last album, 2016’s Platinum-selling California Sunrise. He ultimately delivered an album that both Pardi and Mike Dungan say is even more country than the last one. “…We have a record that is going to go on in history and be talked about for a long time,” Dungan says.

Jon Pardi has been a focal point of bringing more twang and traditional style to the mainstream for the last few years. The 33-year-old launched two #1’s and four total Top 5 songs from California Sunrise, and the album regularly appears near the top of the country albums charts even three years after its release. Pardi is one of the few performers who can find fans across the country music divide, pulling in both traditional and contemporary listeners from across the independent and mainstream realm.