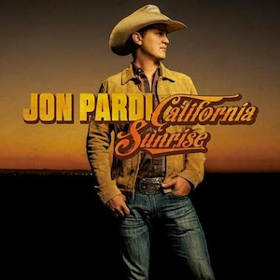 Jon Pardi is the latest traditionally-leaning country music artist to have a strong debut on the country albums chart with a new record. His sophomore effort California Sunrise released on June 17th tops the Billboard Country Albums chart this week with 23,708 album sold, and a total of 29,233 units factoring in streaming data. That edges the California-born songwriter just ahead of Chris Stapleton who comes in at #2 with Traveller, which continues to be the surprise album in country music, and the stalwart at the top of the albums chart in 2016.

Once again the success of California Sunrise demonstrates that traditional country fans are more likely to vote with their dollars and support their favorite artists compared to many mainstream performers. Jon Pardi has also been helped with the continued success of the album’s first single “Head Over Boots.” Released all the way back in September of 2015, the song has been building slowly, just now reaching the Top 10 on both the Billboard Hot Country Songs chart, and the Country Airplay chart. Pardi co-wrote and co-produced the track himself. “Head Over Boots” was certified Gold by the RIAA on May 27th.

Jon Pardi’s success symbolizes the continued gradual shift to an increasing market share of country music leaning to more traditional artists. William Michael Morgan’s debut single “I Met A Girl” has also been slowly creeping up the charts, and broke through the Top 25 last week.

Unfortunately for another traditional-leaning, major label-signed artist, the prognosis is not so good. Despite wide critical acclaim, Brandy Clark’s Big Day in a Small Town has struggled with sales since its release on June 10th. All the album could muster in its debut week was 7,400 copies sold, and 8,100 total factoring in stream data. It still put Clark in the Top 10 of the albums chart, but illustrates the continued struggles for females in country music, and the struggle for major labels to know how to market them. Clark’s current radio single, “Girl Next Door,” is sitting in the 30’s on the charts.