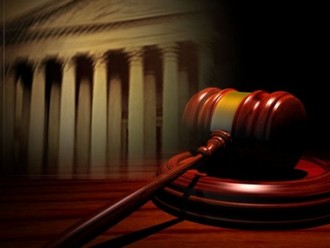 What should have been a mostly routine procedural event turned into a marathon court session as the prosecution and defense in the Wayne Mills murder trial tried to fill 12 juror slots and two alternates to hear the 2nd Degree Murder charges against bar owner Christopher Ferrell in a trial set to start the evidence phase Tuesday morning.

After some pretrial business was taken care of for the first 1 1/2 hours of Monday’s court proceedings, jury selection began briskly, with the prosecution administrating a multimedia presentation to potential jurors about the differences between 1st and 2nd Degree murder, and discussing other matters dealing with the presentation of evidence.

Once again there was concern from the defense about country music names and personalities becoming a primary factor in the case.

“Anyone heard of Waylon Jennings?” asked defense lawyer David Raybin of the jury box. “There will be testimony from country music people … Anyone heard of Shooter Jennings? He’s Waylon’s son. Shooter was in that bar. There’s a picture of him.”

Defense attorney David Raybin made reference to a picture of Shooter Jennings and others taken on Chris Ferrell’s phone the night Wayne Mills was killed, but whether it’s the same one that began circling on the internet after the initial shooting on November 23rd, 2013 is yet to be determined.

“Does anyone read a website called savingcountrymusic.com?” Mr. Raybin then asked potential jurors, and then raised the possibly of country music star and Wayne Mills friend Blake Shelton showing up in the gallery of the court room, or his wife Miranda Lambert. “You’d pay $30 to see them on the stage of the Grand Ole Opry. We live in Music City, you’re going to see country music stars.”

Where the defense was focused on concerns about the jury becoming star struck or distracted if Blake Shelton showed up, or if the presence of potential prosecution witnesses Shooter Jennings and Jamey Johnson would leave jurors’ loyalty compromised, the prosecution’s stance was that only the facts and testimony of the case should matter, not what famous people might show up on the witness stand or in the court room.

Though it appeared an early consensus between the defense and prosecution had materialized upon the 12 jurors, two by two and sometimes three by three, seated jurors were dismissed to be replaced by other members of the bigger jury pool. Though the notes filled out by both the prosecution and defense about objections to certain jury candidates were kept private as they made their way to Judge Dozier, the prosecution was clearly taking a more liberal stance on who should be on the jury, while defense attorney David Raybin continued to weed out jurors the defense had concerns about.

At one point it appeared the jury selection phase might wrap up mid afternoon, but court proceedings did not adjourn until well after 6:30 p.m. As the process continued to become elongated, Assistant District Attorney Wesley King characterized the systematic parring down of the jury as “going to all excesses.” Most parties in attendance took the methodical jury selection to be quite exceptional.

Defense attorney David Raybin also let prospective jurors know there would be a hierarchy of charges that they would be tasked to clear the burden of proof of, beginning at 2nd Degree Murder, and going all the way to Not Guilty. If jurors did not feel 2nd Degree Murder was justified, they could decide on Voluntary Manslaughter. If Voluntary Manslaughter was too harsh, they could find Chris Ferrell guilty of Reckless Homicide. And if Reckless Homicide was not fitting, they could find him guilty of Criminally-Negligent Homicide. But Chris Ferrell’s claim of self-defense was autonomous of these concerns.

Early on in the jury selection process, David Raybin asked all the candidates sitting in the jury box if they felt the burden to prove Chris Ferrell’s self-defense claims rested with the defense. Each jury member answered “yes.” However as Raybin pointed out, in the State of Tennessee, the burden of proof falls on the prosecution to prove if self-defense was not warranted in a homicide trial. Raybin also cited Tennessee’s “stand your ground” law on numerous occasions during the jury selection process.

After jury selection became so elongated that prosecutors were apologizing, potential jurors and even Judge Dozier were cracking jokes, 12 jurors and two alternates were finally decided upon well after the rest of the court building had called it a day.

The court of Judge Dozier, is scheduled to be back in session at 8:30 a.m. Tuesday morning (3-3) with a discussion about the defense’s primary witness, former police investigator and private detective Larry Flair starting off proceedings.