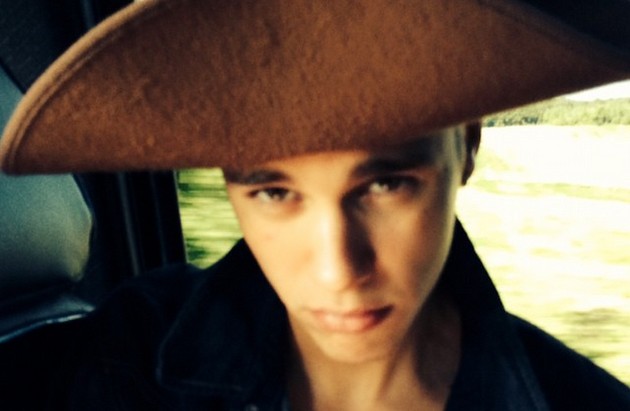 Once again the internet is going ape shit over another Justin Bieber arrest. Apparently he was joy riding his ATV in Canada on his father’s land when he thought he’d ram a minivan and assault the occupants on Friday as pop starlet Selena Gomez held on to his adorable little hips for dear life. Meanwhile the rest of us were working jobs. The fact that this asshole thinks he can do just about anything while hiding behind an army of bodyguards and lawyers is nauseating enough, but now he’s decided to add country music to his cultural lampoon list, along with Ann Frank, Argentina, Australian landmarks, and the rest of the world when he visited the Yasukuni Shrine in Japan dedicated to the memory of war criminals.

Last week Bieber, shirtless and bored, and joined by B-level rapping prospects—like he always seems to have hanging around him in an attempt to make it look like he has friends and any semblance of street cred—decided to take to Instagram and post a snippet of his mocking rendition of Johnny Cash’s “Ring of Fire.” With a pursed and insulting smirk indicative of a 14-year-old who’s never had his ass kicked and hasn’t gone through the most basic adult cognitive development, Bieber sings the chorus of “Ring of Fire” while strumming chords on a guitar.

Then later he posted a picture of himself wearing a cowboy hat sideways, saying “They gave me the sad cowboy hat.” (see above)

Yeah I know, let’s not give this little shit any more attention than he deserves. I just want to let him know that if he thinks it’s cute to mock country, or if he has any designs on “going country,” which he has talked about in the past, he will meet stiff and spirited resistance from this particular quadrant of the American media. Country music may be cute to you Bieber, but to some of us, it is a part of our culture and heritage. So do me a favor, and keep Johnny Cash out of your adolescent and vacuous mouth unless you’re willing to sing with respect.