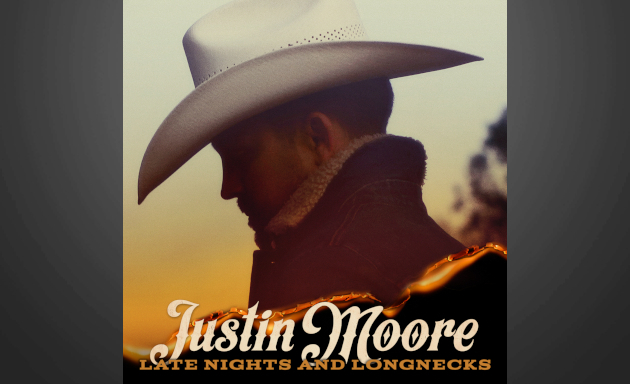 Justin Moore fans will have to wait a little bit longer to get their hands on his latest record and fifth release overall, Late Nights and Longnecks. The record was originally scheduled to be released on April 26th, 2019 through Big Machine Records’ Valory Music imprint. Now it won’t be released until three months later, on July 26th.

No reason has been given for the delay, but it could be to allow his current radio single “The Ones That Didn’t Make It Back Home” a bit more time to climb the charts. Released on October 12th, 2018, the song pays tribute to fallen service members, and a video for the song was released on February 6th. The song has been on the Billboard Country Airplay charts for 22 weeks, meandering just inside the top 40, but gained three spots last week to reach its highest position at #32, and two more this week to sit at #30.

Another song has also been released from the new record, the very traditional-sounding “Jesus and Jack Daniels.” Similar to new albums from Randy Houser, Reba McEntire, and even George Strait, Late Nights and Longnecks is said to be a strong return to Justin Moore’s country roots, with musical contributions from steel guitar legend Paul Franklin, and studio guitarist Brent Mason. Moore co-writes every song on the album, and says it was directly inspired by Dwight Yoakam and Keith Whitley.

Justin Moore has long been a hot topic among country fans. His sophomore album titled Outlaws Like Me had some hot under the collar for his self-proclamation of Outlaw-ism while releasing music under the same label group as Taylor Swift. His last record, 2016’s Kinda Don’t Care set a new low for the Arkansas native in the minds of many true country fans, with clear efforts at chasing contemporary trends. Now that he has committed to releasing a more country-oriented record, it has run into delays. Randy Houser’s Magnolia also was delayed multiple months before receiving a release.