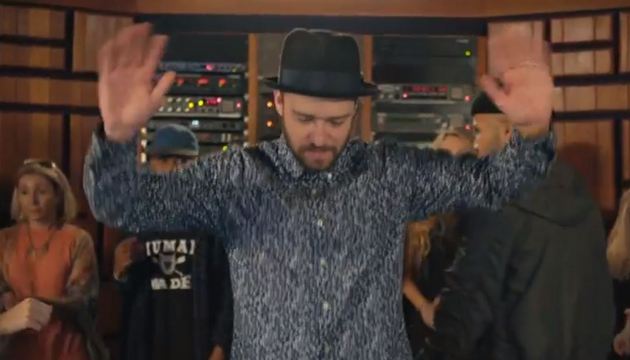 Saying that Justin Timberlake’s new single isn’t country may seem like an obvious statement, except that many were anticipating that the next move the pop singer and songwriter would make would be to dip his toes into country waters. Hell, after he’s been dropping monstrous hints about the move, purchased a spread just south of Nashville, had his producer Timbaland pretty much spell it out for everyone, and then was spotted recording in Music City, it all seemed like a forgone conclusion.

And in all likelihood, Timberlake will still make a move into country music. But not just yet. His new single “Can’t Stop The Feeling” won’t have anyone mistaking it as country, and will likely not be tied to any new, proper Timberlake album. Instead it is a single being released as part of an upcoming soundtrack for a DreamWorks Animation movie called Trolls due out September 23rd. Timberlake is the soundtrack’s creative director, and is said to have multiple songs on the album.

The situation may be about perfect for Justin ahead of any moves into country music. Through the soundtrack, he can release a slew of pop singles that hopefully perform well, and have built-in marketing potential through the movie. Yet Timberlake can still keep his own solo album cycle clean so that if and when he rolls out a new project, he hasn’t worn everyone out. So the pop world gets their taste of some new Timberlake, and the country world may still receive the brunt of his new record.

Besides, if he was recording in Nashville in late 2015 as reports indicated, releasing new singles now would be a little bit early in the process. Nonetheless, Instagram photos prove he’s been collaborating with Little Big Town in the studio continue to swirl, and it wouldn’t sound strange to hear that his duet partner at the CMA Awards last November, Chris Stapleton, will also have some part in any country effort.

But there is some indication Justin Timberlake’s move to country may not all be smooth sailing. About a week after Timberlake’s performance with Chris Stapleton on the CMA stage, he released the song he performed  with Stapleton called “Drink You Away” to country radio as a single. Many have forgotten that development in Timberlake’s move to country, partly because the single performed so poorly. Whether it’s because country music’s notoriously-insular program directors balked at the prospects of Justin Timberlake on country radio, or there was never truly much heft behind the effort, it absolutely flopped. The song, which at the time was roughly 2 1/2 years old, failed to chart whatsoever on any major list.

Some of this could be attributed to how after the single was announced, little or no promotion accompanied it, but if we get other indications that Timberlake is getting cold feet on going country, the fate of “Drink You Away” could be partly to blame.

As for “Can’t Stop The Feeling,” it is pure fluff, and won’t go far in ingratiating Timberlake to anyone in the traditional country crowd. It feels very much like a lead single from a pop album, similar to Taylor Swift’s “Shake It Off.” Not surprising since the scourge of modern popular music—Max Martin and his little buddy Shellback—are co-writers and producers on the song. This thing is scientifically formulated to shoot straight to the top of the charts, and put Timberlake back in the exclusive company of true superstars.

If we’ve learned anything from Timberlake, it’s that he’s a meticulous and careful artist. Since going solo in 2002, he’s only released three proper albums. So patience is important for those anticipating his country release, and it seems like country fans will have to wait a little longer to find out if it is ultimately worth the wait.

“When I’m making a record for myself, I don’t know, I feel like I have to take advantage of the fact that it’s done when I love every song,” Timberlake says to SiriusXM’s Morning Mashup show. “It’s done when you know it’s done. So, I don’t like to start making a record and go, ‘Oh, yeah I gotta get this out by this certain date,’ because who knows, you may write 12, 13, 14, 15 songs and then who knows, that 16th song that you didn’t get a chance to write may be like ‘the one.'”