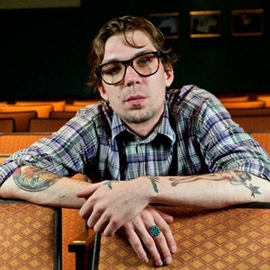 Songwriter and performer Justin Townes Earle has been on the warpath as of late through his always-entertaining Twitter account, taking to task a record label for standing in the way of a new release.

On October 19th, Justin seemed to allude through Twitter that he was done writing the material for a new album, posting “I might have finally finished writing this bitch!!!! Freedom!!!!!!!!”

Then more recently the tone has turned quite sour, with Justin posting on December 15th, “I have now learned that you can never trust a bunch of babies that ain’t worked a day in their lives. May Shane McGowan kick their asses. The only thing I hate about business is that it’s frowned upon to pistol whip the competition. Tweets are gonna be angry for awhile. Just found out I won’t be making a record for a while due to a bunch of pussies in an office. Never working with another record label.”

Shane MacGowan is the front man for the Irish rock group The Pogues.

Then on December 18th, Earle posted, “So I am being told that I agreed to write 30 songs and let the label “help” make the record. That for sent even sound like me! Like I would ever let some little twit fucking comb through my work. And calling me a liar well them is fighting words. Anytime bitch’s!”

Instead it is apparently Communion Records—a British label owned by Ben Lovett, the accordion and keyboard player of Mumford & Sons, and Kevin Jones of Bear’s Den—that is drawing Justin Townes Earle’s ire. Justin clarified this today (12-19) through Twitter, saying “My rants have to do with communion records! not bloodshot. leave the good people at bloodshot alone! Badger the fucking Brits.”

Justin told VOX Magazine in April, “I’m trying to wrap up writing my next record. It’s one that I’m paying very close attention because I’ve completed my contract with Bloodshot (Records). I’m going to be moving on to probably a little bit bigger (label). I’m just trying to do my best, to be in control of my everything producing records and all that stuff. We actually already have offers from labels. I’ve recorded one track mainly because a couple of the bigger record labels are looking at me. We made a teaser track just to say this is what we do, this is how we do it, and this is how we’re going to do it.”

The conflict appears to be with Communion Records requesting Justin turn in 30 songs that they can then vet to eventually be parred down to his next record, but Earle doesn’t have that many songs so the album-making process can’t move forward. What this means in the long run is that it could be a while for new Justin Townes Earle material.

“Let me make this clear! I have not, and never will write 30 songs in a year. That isn’t art it’s vomit. I write a record. Quality matters not quantity! I deliver records in sequence and have a pretty good record so far. I don’t need the new kids giving me tips. Lady’s and gents. I will find a way to get new music out very soon. Will write and record a solo EP. Then Find some grown ups to work with.”