Kacey Musgraves Delivers for Country at the 56th Grammy Awards 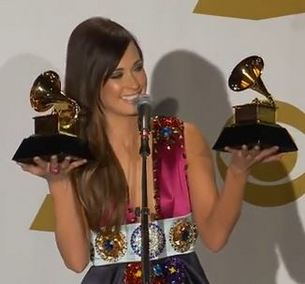 I say it all the time. There are so many of these little organizations, so many labels, and festivals, websites, and Facebook groups, and individuals all working to somehow change the direction of country music, when none of these things are going to be the ultimate solution. Though anyone that takes up the charge for country music should be commended, and these things can help in their own way, the solution is not going to be delivered by an organization. It is going to be delivered by a song.

One song, one artist, can completely change the country music paradigm all on its own. And then another song can help take it even further, exposing the frailty and failings of bad art without the need of rhetoric, leading country music in a more substantive, sustainable direction, and one that shows deference to the roots of the music and leads by example. Then the organization and infrastructure will follow.

As Kacey Musgraves’ success has grown, so has her criticism, and it is stronger now than it has ever been with her Grammy wins. There are many people who will tell you she’s just simply an alternative version of Taylor Swift—pure pop and no type of positive gain for country music whatsoever. Ignore the steel guitar and banjo in her music, or the fact that Same Trailer, Different Park has sold 300,000 copies, while Taylor Swift’s last album has sold over 4 million. At some point, it’s unfair to both artists to compare their contributions, accomplishments, and impact.

But I’ve been critical of Kacey Musgraves myself. Despite the overwhelming success of “Merry Go ‘Round”, in my original review of the song I said it had its moments of immaturity and judgmentalism, just like some of her others songs. Some of the Kacey Musgraves hatred is rooted in political displeasure at some of her lyrics, and artists who go in a political direction run that risk and can’t be surprised when they’re rued for it.

When it came to selecting the songs for Same Trailer, Different Park, some songs that were better than the ones that made it on the album were left off. After “Merry Go ‘Round,” the single selection from the album has been questionable to poor, both in presenting Kacey Musgraves’ style fairly, and for creating commercial success. Her singles are also behind much of the criticisms that Kacey is nothing more than a pop star.

Beyond song selection, there was something else under the surface troubling me about Kacey Musgraves. There was an unsureness, and unsteadiness that had allowed self-doubt to creep in and mistakes to be made: “The look” that Kacey was caught making at the CMA’s when Miranda Lambert won, the conflict with Clear Channel DJ Bobby Bones. Kacey Musgraves came across as almost aloof, beaten down by how things were going, hating the hoops she had to jump through, like the weight of the world was on her shoulders to deliver, and maybe trying to determine if her music was in the right forum.

Yet my sense of Kacey Musgraves the person was that we had yet to see what she was completely capable of. She had yet to come into full bloom. We forget she’s still a young woman, 25-years-old. Looking through her music, I saw even more potential. I saw a compass; a person defined by her pursuit.

Compared to many artists, Kacey was enjoying overwhelming success. But Kacey didn’t want to just be another name in the country music gaggle, she wanted to lead. She believed in her music, and that it could have a wide impact if it only found the right audience.

Listen to some of the things Kacey Musgraves had to say backstage at The Grammys after her wins:

I literally can’t put into words how excited I am to represent the country music genre with the music I’ve gotten to make. I made a record that was inspired by real life and everything I was going through at the time, but also all of the traditional country music elements that I’m in love with. If there’s a way that I can be a part of preserving that, but also making it my own, I feel like I’ve done my job.

Everyone, all the writers on the record, like I’m just super huge fans of. Brandy Clark, Shane McAnally, Josh Osborne, Luke Laird, they’re amazing in their own right, and I’m just so glad their work is getting to shine and I’m just a small part of what they’re going to do to change music.

These aren’t quotes from a artist that wants to make a big splash in the industry, they’re quotes from an artist that wants to change country music, that wants to broaden its reach, and not by instilling it with sensibilities, but by expanding the appeal for its inherent and classic beauty. Her music is still the same at it was before the Grammy Awards. But now it has been validated. Now she can move forward with confidence that her goals and her efforts are in lock step, and heading in the right direction. Kacey Musgraves and her music are leading, but most importantly, the industry is following.

Kacey Musgraves was the big winner of the 56th Annual Grammy Awards, but her success does not exist in a bubble. You put this next to George Strait’s win for Entertainer of the Year at the CMA Awards in November, and so many of the other positive signs for country music that have been transpiring recently, and you begin to understand that things are changing. Saving country music is no longer theoretical, and the downtrodden and depressed traditional country music fan has to stop identifying themselves with being the losers, and quit buying into the idea the anything successful must mean it is pop, or otherwise compromised artistically.

There were better artists, better albums, and better songs in country music in the last year than Kacey Musgraves, Same Trailer, Different Park, and “Merry Go ‘Round”. But guess what, they never had a chance. But Kacey did, and she delivered.