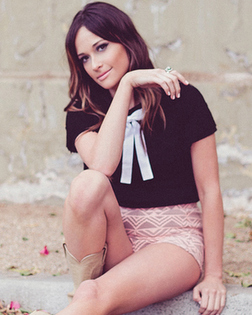 Say what you want about Kacey Musgraves, but you have to give the young songstress credit for speaking her mind. In a recent Q&A with GQ Magazine, the Texas-born songwriter had some spicy things to say about a few of Nashville’s current infatuations. When GQ asked her what musical trend needed to die out immediately, Kacey responded,

Anyone singing about trucks, in any form, in any song, anywhere. Literally just stop – nobody cares! It’s not fun to listen to. I thought dubstep was cool for two seconds – but that can go away now too. It sounds like a malfunction of some kind.

Beyond bagging on truck songs, Kacey also took to task the current favorite fashion attire of truck song artists like Brantley Gilbert when asked what the best dressed men in Nashville are wearing these days.

Nothing by Affliction. Just burn the warehouse down. It’s just douchey and really gaudy.

So what does Kacey like to see guys dudded up in?

I like when people have Western style but it’s throwback Seventies-ish. I like pearlsnap shirts and a bow-tie like the KFC man.  I like Katy K’s: it’s kitschy in a good way. It’s not trying to be like cool cowboy which is lame. They have the western bolo ties for men and button-ups with cacti on them. Go there.

This isn’t the first time Kacey Musgraves has spoken out about the direction of country music. In April, Musgraves appeared on CBS’s Sunday Morning show and also bemoaned truck songs, saying in part, “…[you] don’t have to sing about trucks and tailgates to be a country artist.” Then in May when talking to American Songwriter, Musgraves said in part, “…I love country. Do I love what it’s turned into? No…”