The new Kacey Musgraves album Golden Hour will finally be arriving from Mercury Nashville on March 30th. This was officially revealed on Friday (2-23) after bits and pieces of info have been leaking out over the past few months, and the release was originally scheduled for “late winter.” Her 3rd official LP was produced by Ian Fitchuk, and Daniel Tashian (the Silver Seas), and is preceded by the release of two songs “Space Cowboy” and “Butterflies”—at least via streaming and download services.

“Butterflies” is said to be about Kacey meeting her husband and fellow performer Ruston Kelly, while “Space Cowboy” is said to be about a previous boyfriend who doesn’t want to be fenced in, and finds Kacey using a bit of the same word play that has been a part of many of her her previous songs. However neither song has been released as a single. In fact very similar to Mercury Nashville label mate Chris Stapleton, it’s questionable if there is any singles strategy for Kacey Musgraves and Golden Hour at all at the moment. Often major label albums are preceded by the release of a new single many months ahead of the album itself for promotional purposes.

The title of the new record was said to be inspired by the recent solar eclipse, but Kacey’s hometown in east Texas is also named “Golden.” Other songs from the record that fans have heard live aldready include “Wonder Woman” and “Velvet Elvis.” Though in previous interviews Musgraves has said for fans to expect a “trippy” sound from the new album, and artists such as Sade and The BeeGees have been cited as sonic influences, the first two songs sound like Musgraves for the most part, aside from the fact that so far there’s no evidence of the campy country lyricism of previous works. 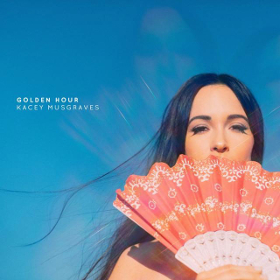 As the winner of two CMA Awards, an ACM for Album of the Year, two Grammy Awards, and the beneficiary of a strong grassroots following and a favored status among more traditional and critically-minded country fans, Kacey Musgraves should be considered one of the premier performers in the mainstream. However Music Row continues to struggle to understand how to market her. Hopefully a strategy reveals itself for Golden Hour as the release nears.

If you do the Spotify thing, the new songs can be heard below.