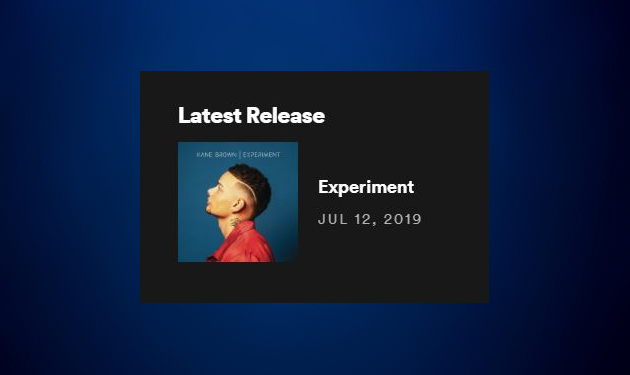 A couple of weeks ago when many country fans were logging into their Spotify accounts or shuffling through playlists, they may have noticed Kane Brown’s latest album Experiment being promoted as a new release. Promoting new releases by big performers in popular country is nothing new for Spotify. The streaming giant regularly engages in this practice on landing pages and in suggestion feeds, matching a user’s streaming habits to whatever they think that user might be interested in that has just been released. These suggestions are considered prime real estate on the streaming format since they can result in thousands or millions of streams for whatever is being promoted.

What was strange about this particular incident is that Experiment by Kane Brown was not a new release at all. The record was released on November 9th, 2018, some nine months ago. As can be seen in the screenshot at the bottom of this article, the album was being promoted right beside Kenny Chesney’s single “Tip of My Tongue” released on July 12th, the new Chris Young single “Town Ain’t Big Enough” also released on July 12th, and Ryan Hurd’s Panorama EP released July 19th.

A conspiracy theorist might hypothesize that the release date for Experiment was changed on Spotify to send the Kane Brown album through the promotional cycle on Spotify for new releases a second time to embellish the streaming numbers and promote the release. Since Kane Brown has been the party to accusations of manipulating streaming markets in the past, this was the thought that ran through some people’s heads when they saw Experiment re-racked on Spotify. Regardless of the real reason for the date change, that was still the end result.

Granted, there are many albums on the Spotify format with incorrect release dates, though they’re mostly older titles that display the date they were added to the Spotify format, and not their original release date, and most are not modern releases like Experiment. Sometimes labels release deluxe editions of albums to re-engage interest in a title, with new songs added. But this isn’t the case with Experiment either. There are also other reasons why a record label might re-upload an album onto Spotify or other formats that are not nefarious, perhaps due to legal or publishing concerns with the metadata on tracks needs to be refreshed. Such a practice wouldn’t be out of the norm, though it is strange the release date would be an oversight, and why Spotify’s curators would not catch that Experiment was being promoted through their format as a new release.

Saving Country Music reached out to both Kane Brown’s record label, Sony Music Nashville, as well as to Spotify, to hopefully receive clarification on why the release date for Experiment was changed. Unfortunately those requests were not returned.

Regardless of the reason for the Kane Brown date change, and the oversight of allowing the title to be promoted as a new release twice, it underscores the concerns of many about the unregulated nature of music streaming, and how it seems as if some artists or titles receive preferential treatment, and that some may have their hands in the pockets of the right people to get their songs, albums, or artists promoted.

The FCC has rules on what is referred to in the radio business as “payola” to make sure such manipulations in the market don’t exist. Streaming giants such as Soptify, which in 2019 have arguably way more power to make or break and artist or title, don’t have anyone looking over their shoulders. Consumers and industry professionals should be mindful of how we’re living in the asterisk era in music at the moment, where the information feeding into charts may either be incorrect, or manipulated behind-the-scenes, resulting in an unfair boost for songs or albums on the charts.

Purposeful or accidental, Kane Brown’s Experiment received an unfair advantage by the changing of its release date on Spotify. To make sure such anomalies don’t become the norm, more transparency and oversight should be insisted upon by the public to make sure it’s the appeal of a song that allows it to thrive, not the manipulating of promotional tools and algorhythms.

UPDATE: The reason Experiment was re-uploaded to Spotify could have been due to the addition of a song called “Like a Rodeo” to the track list that was released on July 12th. However the song was sold as a “standalone track,” and not part of Experiment. It is either not available, or only available as a standalone track on other formats. Furthermore, the addition of this song would not, and should not change the release date of the entire Experiment album. At the least, “Like a Rodeo” should have been listed as a new release as opposed to the whole record. 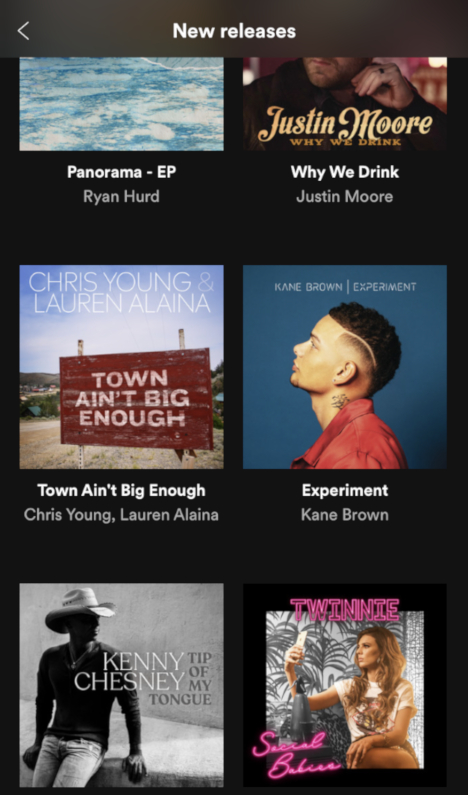