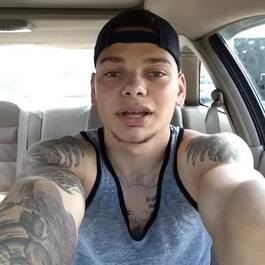 Purported country music “viral star” Kane Brown is now a major label artist. And if you thought your acid reflux got a workout when you watched Luke Bryan and Sam Hunt up on stage claiming to be country singers, Kane Brown is guaranteed to kick it up yet another notch.

As much of an earache as Sam Hunt or someone like Brian Kelley of Florida Georgia Line might be, my guess is if you asked them on the spot to name five Hank Williams songs, they could rattle off satisfactory answers, even if they have to struggle to come up with the last couple. But Kane Brown? I’m not sure he even knows who Garth Brooks is, let alone what country music as an artistic expression is supposed to be. Sam Hunt and Luke Bryan at least paid their dues as songwriters. Kane Brown flunked out of The X Factor and posted a couple of videos to Facebook. Apparently in 2016, that’s enough to prove your worth.

“A lot of the people in Nashville think the numbers are fake, but they can’t prove it. They’ve never had a Justin Bieber in country music, so they don’t know how to deal with it,” is what Kane Brown told the Times Free Press a while back.

Anyone with any sort of cursory understanding of country music would never compare themselves to Justin Bieber, and the reason Kane was so defensive about his numbers is because a lot of people believe they are fake, and were partly stimulated by cozy relationships between Kane Brown’s manager Jay Frank, and streaming entities. Instead of proving his worth in songwriting rounds or slagging it out in bars, it’s millions of questionable views and streams that have put this 22-year-old in the spotlight.

None of that matters now though. Kane Brown has put pen to paper with Sony Music Nashville, and now he’ll be releasing singles and albums in the mainstream and showing up at awards shows and other mainstream functions regardless of the manipulations that got him here. He’s also been booked to open for Florida Georgia Line on an upcoming tour.

No matter what you think about his music, the lesson of Kane Brown is that you can cheat to get ahead, and you don’t have to pay any dues or prove yourself in the marketplace.

The “Justin Bieber of country music” sounds about right.