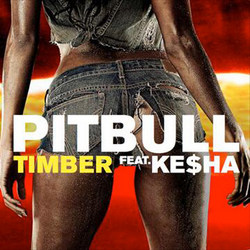 Back in July of 2012, I placed my chips on the square that said that sometime in the future pop star Ke$ha would be a big player in the country music realm, and that when she did, she would be huge. Ke$ha’s mom is country songwriter Pebe Sebert that wrote the #1 hit “Old Flames (Can’t Hold a Candle To You)” for Dolly Parton amongst other notable compositions, and Ke$ha has professed her love for country music, and specifically Dolly Parton, Johnny Cash, and Townes Van Zandt.

It’s hard to call “Timber”—her current collaboration with Latin rapper Pitbull—a country song, but it’s just as hard to ignore that this song is trying to capture a country/Americana vibe through its production. In many respects, “Timber” is the perfect mono-genre specimen. Take a Latin hip-hop artist, an LA pop star via Nashville, inject elements of American country culture like harmonica, the line “swing your partner, ’round and ’round,” reinforce it in the video with choreographed line dancers wearing cutoffs carousing in a honky tonk with a jug band playing in the background, and you’ve got yourself a bona fide mono-genre master work.

And the results of their attempt to touch on every element of popular American culture without pigeonholing the song into any specific genre speak for themselves. “Timber” is now the #1 song in all of music, and it’s video has received 61 million+ hits at the the time of this posting. This is the kind of results that can be garnered when your music has no limits based on traditional lines of genre, culture, race, or even geography.

The video for “Timber” was shot in two primary locales. Pitbull’s portion of the was mostly filmed in The Bahamas, while Ke$ha caught a more country vibe by filming in a honky tonk in Miami and a ranch outside of the city limits. Horses, chickens, and bikini’ed Ke$ha chopping wood (a day’s work is never done, apparently) are all featured in the video, and so is, of all things, a relatively-obscure, but worthy-of-your-ear band from Orlando called The Bloody Jug Band.

The Bloody Jug Band is a true jug band (yes, they have a jug player) that features very traditional instrumentation around an otherwise very progressive Americana sound with a dark, macabre approach. At first glance one might think this is a gimmick band, but their compositions reveal great depth in both theme and structure, constituting their debut album Coffin Up Blood to be nominated for Saving Country Music’s Album of the Year in 2012.

“It was just one of those opportunities that fall in your lap,” says Bloody Jug Band frontman Cragmire Peace. “I got a call on a random weekday, and one of the producers of the video got me on the phone and said, ‘This is going to be a weird conversation.’ She went on to say they were looking for a jug band type of sensibility in the video—instrumentation of some of that old-timey music—because that’s what they considered fit well with the kind of Americana vibe of the song. And when they looked up jug bands, not only did we come up, but we’re also in Florida. So they pretty much loved the ready-made package.

The inclusion of The Bloody Jug Band in the Ke$ha/Pitbull video speaks to just how far the video’s producers were willing to go to capture a country/Americana vibe in the shoot. “They could have easily cast four assholes to be extras in this video, and it wouldn’t have been The Bloody Jug Band and it wouldn’t have meant anything,” Cragmire Peace says. But they didn’t.  Though you would definitely have to categorize “Timber” as hip-hop or hip-pop first, producers were trying to be inclusive to the rising popularity of country music, and even bands like Mumford & Sons. At the same time, the use of The Bloody Jug Band speaks to another trend in music that is helping out many independent bands. 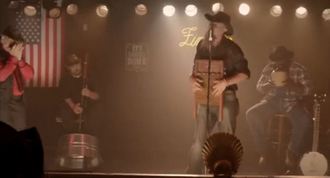 “You hear a lot about this in TV and the licensing of music,” Cragmire explains. “They figured out it was way cheaper and way more mutually beneficial to instead of having composers you hire for the music, to actually co-opt independent bands and put them in the credits. I think it is more typical in TV right now than it is in music, or popular music, but I think it opens the door for people. It’s a window into another type of music. “Timber” has sort of the Americana vibe to it, and that’s probably a little different for Ke$ha and Pittbull to have done. So the fact that they introduced into the listener’s ear, for people to realize that there’s dynamic music in this genre going on, I think it’s a great door opener for people to hopefully step through, and they can be turned on to this other type of music. And hopefully pop culture realizes that to take a chance on an independent band, and feature them in your video, or to use these bands in some other way, it helps the band out, it opens people’s eyes, and ultimately I think it’s not bad business.”

Cragmire Peace says he’s no fan of pop music, Ke$ha, Pitbull, or “Timber” specifically. “It’s easy to beat them up. But if it means more exposure for The Bloody Jug Band or Americana music, I don’t care what door they came through. The end result is what matters, not how they got there. Even if people don’t know who they’re looking at, if they’re somehow captivated for the 5 to 8 seconds that we’re actually in the video, then that’s cool. To be exposed this way but have people respond to it like they have, I think that’s very powerful and validating for any artist, but certainly what we’re trying to do with The Blood Jug Band.”

Meanwhile the resounding success of “Timber” likely means we can expect more blending of country/roots/Americana elements into pop and hip-hop music, while rap elements in country music are now a mainstay of the genre, and Jerrod Niemann’s recent single “Drink To That All Night” adds the world of EDM and dance music into the mix. The autonomy of American music genres remains in full retreat in mainstream music, and 2014 promises to be the most brave year yet for breaking rules, blending genres, and toppling borders.

(The Bloody Jug Band have a new EP out, Murder of Crows, and a new album planned for later this year.)