Kellie Pickler: “Too Many Suits & Ties Trying To Make The Calls” 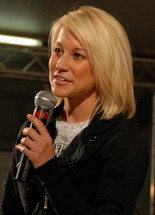 Former American Idol contestant Kellie Pickler’s 2012 album 100 Proof shocked the country music world with its bold, traditional sound and soulful compositions, so much so that Rolling Stone and Saving Country Music both named it the Album of the Year. Well Kellie is now back in the studio and wants folks to know that 100 Proof was not an aberration. We can expect the same type of authentic country sound on her next one.

Speaking to Taste of Country, Kellie explained she has found her sound that she’s coined “Kellie country,” and it won’t be changing much on her next album. The producers of 100 Proof Frank Liddell and Luke Wooten will be collaborating with Kellie once again on the new effort, as will many of the same musicians. Kellie is currently in the midst of the recording process, and eventually will release the new music through Black River Entertainment after parting ways with her previous label Sony due to disagreements on the traditional direction of 100 Proof.

While some listeners have wondered if Kellie would stick to her more traditional sound in the face of label adversity and a lack of singles and big sales numbers from 100 Proof, Kellie now seems even more steadfast. “[It] is definitely going to be my country”¦[there were] too many suits and ties, trying to make the calls…This record will definitely be Kellie country, for sure.”

In July of 2012, Kellie explained how trying to put out 100 Proof through Sony was “hell.”

Well, it wasn’t promoted. When my album came out, I didn’t even have a song out on the radio. Nobody does that. [The label was] spread thin”¦Recording this album, to be honest and I don’t mind saying this the process was hell. [Sony and I] couldn’t agree on songs. The thing is, my life is a country song. I don’t need to be manufactured, and I don’t need anyone to tell me what to say or what to sing.