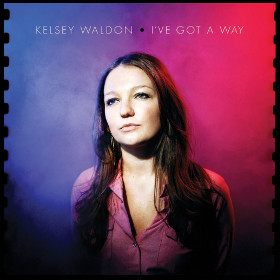 If you’re rounding out a list of the current artists who are helping to save country music, you better damn well make sure Kelsey Waldon makes it on there or the whole enterprise is bunk. Her 2014 record The Goldmine was a badass collection of classic country tunes that had fans of traditional country singing her praise, and on August 12th she’ll be releasing a slew on new songs on her sophomore album I’ve Got a Way.

Produced by bass player Michael Rinne, the album features a bunch of new originals, as well as covers of Bill Monroe’s “Travelling Down This Lonesome Road” and the Vern Gosdin-penned “There Must Be a Someone” featured on The Byrd’s album Ballad of Easy Rider. And to wet your whistle, Waldon has release a debut single from the record called “All By Myself,” along with an accompanying video.

The video for “All By Myself” was partially shot in the curiously-named town of Monkey’s Eyebrow where Kelsey Waldon originally hails from, and certain scenes were shot on the land she grew up on. Waldon is also planning a summer and fall tour to coincide with the release, with the dates to be released very soon. Until then you can feast your dirty eyes on the track list and “All By Myself” video below.