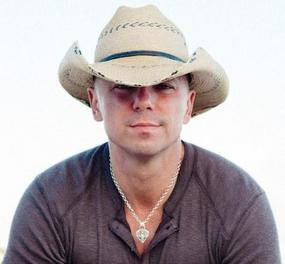 Kenny Chesney rolled his Big Revival Tour with special guest Jason Aldean into the historic football town of Green Bay on Saturday night (6-20), and set his stage works up on the hallowed ground of Lambeau Field for a stadium concert. The show also included openers Old Dominion, Cole Swindell, and Brantley Gilbert, who the local Journal Sentinel reviewer singled out and chided for his, “‘bad ass’ attitude [that] was certainly overblown, between a ridiculous ‘tough guy’ video intro, his drummer’s mohawk, the brass knuckles attached to his mic, and his barking stage banter, similar to a WWE wrestler.”

Local media and some sports fans were somewhat leery of Kenny Chesney’s arrival at Lambeau since the last time country music’s beach king came to town in 2011, it resulted in 15 arrests and 60 ejections from the concert, as well as concerns about how so much foot traffic and temporary construction could impact the playing field. The 2011 Chesney concert was also the last time a concert had been held at the football shrine, and some sports fans cited Chesney’s now infamous concerts at another famous football stadium—Heinz Field in Pittsburgh— as a concern, where Chesney-mania has resulted in shocking photos of trash and bloated arrest statistics for the last few years.

***UPDATE***UPDATE: The Green Bay Police and Fire have released updated numbers for the concert. Capt. Paul Ebel said, “I don’t recall, in my 27 years ever having a game where we were this busy.” 25 people were arrested, another 125 people had their tickets confiscated, and a total of an estimated 250 to 300 ejections from the concert. Alcohol was said to be the major issue at the concert. Green Bay Metro firefighters also responded to between 50 and 60 calls for assistance and transported four or five people to area hospitals, said battalion chief Steve Sellin. These numbers were also significantly higher than at average Packer games.

One enterprising local reporter, Doug Schneider of the Green Bay Press Gazette decided to listen in to the police scanner during the concert and Tweet what he heard—something Schneider is known for doing during Green Bay Packers games. The result is somewhere between scary and hilarious, and once again lends to the theory of the subversion of country music.

And yes, I first discovered this through The Big Lead so hat tip to them, and it’s yet another example of disdain for today’s country music bleeding into the sports realm.

Enjoy, and feel free to vote for your favorite below.

“Vehicle just keeps going around the roundabout. Looks like a Honda van.” #scannersquawk

“I’m goin’ round n round with that vehicle. I’ll get it stopped eventually.” #scannersquawk #RoundaboutPursuits

“Female fell off a guardrail. Hit her head.” #scannersquawk

“See the usher, for a male that is grabbing females.” #scannersquawk

“Passed out in the women’s bathroom” #scannersquawk

“She’ll call us back if she smells it again.” #scannersquawk

“By the Pro Shop ”¦ there is a large fight there.” #scannersquawk

“Male-female disturbance in the stairwell.” #scannersquawk

“Male party with a nose injury and has been tased by the PD.” #scannersquawk

“We’ve got a fight over here, copy?” #scannersquawk

“Male subject who is intoxicated, foaming at the mouth, unconscious.” #scannersquawk

“Kids throwing big firecrackers into the street. There’s kids and motorcycles nearby.” #scannersquawk

“Vehicle that crashed into a house. They are asking you to go out and check the house.” #scannersquawk

“Irate customer causin’ a disturbance in the Atrium by the wristband table.” #scannersquawk

“He was spoken to earlier for sneakin’ in booze. Now he’s harassing the people around him for turning him in.” #scannersquawk

“By the beer stand. Fight.” #scannersquawk

“Section 316, row 7. There’s throw-up all over the section.” #scannersquawk

“Report of couples in the restroom.” #scannersquawk

“Outside my gate, about two rows out, male that’s intoxicated, passed out ”¦ laying by a lamppost” #scannersquawk

Last guy passed out two rows from his Lambeau gate. That’s like getting tackled on the 1.

“Front of his pants are all wet because he urinated on himself ”¦ red shirt and soiled pants.” #scannersquawk #midseasonform

“A party laying near the bushes ”¦ out like a light.” #scannersquawk

Caller wants to leave disabled vehicle along I-43 “because she’s going to the Kenny Chesney concert.” #scannersquawk