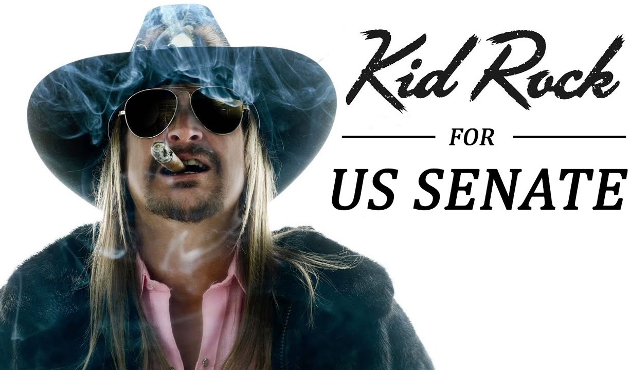 If you ever thought that there was even an inkling of a chance that Kid Rock was ever going to run for the United States Senate—or even worse, if you actually wrote an article for or against it, or took to your dumbass social media feed to pontificate about it one way or the other, and followed it up again earlier this week when he stated the obvious that it was always bullshit—then you probably don’t deserve to be offering opinions on music or politics at all.

Of course Kid Rock wasn’t running for the fucking Senate, and none of your think pieces tying Kid Rock to the plot of Idiocracy or the erosion of American values were ever going to amount to a hill of beans beyond being a vehicle for his skeezy, drunk ass to promote his shitty music for free through the forum of the free press. He played you losers like a cheap fiddle, exploiting the hyperventilating, oversensationalized, and myopically-focused attention on all things politics in 2017 that has encroached overbearingly upon every single sector of American life, and music especially.

Now don’t get me wrong here, I’m not dogging Kid Rock for what he did. My hat is off to him. Bravo. The crime here isn’t that some scuzzy pseuo rock/hip-hop anti-hero was able to arrest the national narrative on multiple occasions to garner free advertisement through media infrastructure that’s supposed to be covering actual news. It’s that the media let him. I think it’s a masterstroke of genius on Kid Rock’s part, and possibly the most creative and intellectually arresting thing he’s ever done in his otherwise diabolically awful career. Well, that Sheryl Crow duet wasn’t terrible I guess.

To have CNN, Fox News, and all the rest eating out of your hands as you take the stage barking a good piece of bullshit about what you would do as an elected leader was such grand theater, they should give Kid Rock a Grammy, or an Oscar. You can’t josh about anything these days without principled tight-asses getting so fervently incited that they’re willing to proclaim the end of the world, while the entire media en masse preempts actual news coverage to post reports of what Kid fucking Rock said from a podium with a seal that says “‘Merica” while flanked by bikini floozies. You fools.

Even if people know something is not true, it’s like deep down they want it to be, because it plays into their heartfelt desire to see everything go to shit as validation for their extreme ideals. And when did we become so inept at sniffing out sarcasm? Idiots in both political parties saw Kid Rock’s fake Senate run as a bonanza for fundraising, even to the point where actual political infrastructure was constructed around the possibility.

Kid Rock—The Wet Cigarette of Music—understood that with such political acrimony and divisiveness swirling in the air, and such incredible laser focus being given to politics by all sectors of American media, gaming the system with a political angle was the only way to get people to actually pay attention to his rehashed music and dwindling career. Now Kid Rock is back on top, making use of the fact that America is now all politics, all the time, instead of suffering from it like many musicians and media outlets who refuse to play ball.

So what was all the bluster about in the first place? Does Kid Rock have a new song, an new album on the way, tour dates, and all with ties to country music to make the long-awaited Kid Rock “gone country” moment come closer into focus?

Fuck you, find that info yourself. I may distantly appreciate the devilishness of Kid Rock’s ruse, but I refuse to participate.