Kill Me Now: “Party Down South 2” Is On Its Way 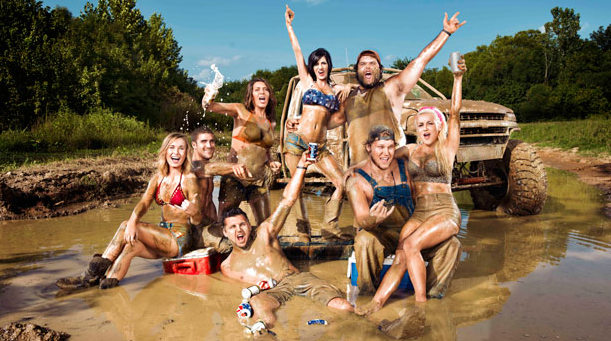 As if one whoring of Southern culture and abandonment of even the most basic values in the obsequious search for the almighty advertising dollar wasn’t enough, CMT has decided to double down on their already embarrassing, tasteless, and crime-riddled reality show franchise Party Down South, and launch Party Down South 2 according to a recent announcement by their willing accomplices in corporate media, Entertainment Weekly.

No, this is not just a new season of the disgusting, worm-riddled filth of a television show, this is an entirely new franchise, and an entirely new cast that will transpire parallel to the current show. Party Down South 2 taped in Biloxi, Mississippi will start airing in November, while the original Party Down South will air its 3rd season in February. Think of it like adding Chlamydia to your herpes outbreak. And to sprinkle a little Gonorrhea in the mix, CMT will also be airing both “Drunksgiving” and “Christmas Hangover” Party Down South specials, providing plenty of family entertainment for your holiday festivities.

Brought to you by the same assholes who created Jersey Shore, the Party Down South series shoves eight idiots in a house, supplies them with enough booze to kill a horse, sets the cameras rolling, and proffers it all to the public as an accurate representation of Southern living. This formula works so well, one of their cast members Taylor “Lil Bit” Wright quit after last season, saying that she “feared for her safety.” The news came down right after another cast member, Ryan “Daddy” Richards, was accused of rape by a woman who says she entered the Party Down South house, was handed an open beer, and woke up later naked in a bed with a camera in her face. The woman went to the hospital the next day, and according to medical professionals, showed signs of sexual assault. An investigation by local police that included interviewing cast and crew and reviewing footage, did not result in any charges being filed.

Other Party Down South cast members have found themselves amidst controversy and legal trouble since the beginning of the show. Louisiana native Lyle Boudreaux was arrested in Maurice, LA for burglary of a vehicle at a Mardi Gras parade after he found an unlocked car, rifled through a woman’s purse, and stole a credit card to fund the night’s drinking. Mattie Breaux of Louisiana was also served a bench warrant after she failed to appear in court for a previous arrest for driving while intoxicated. Breaux was taping Season 2 of the reality show at the time of the hearing.

Party Down South has come under heavy scrutiny for its portrayal of Southerners in the show. Season 2 was initially scheduled to be taped in Pensacola, FL, but had to move to Athens, GA when local residents and businesses did not want the show blemishing the city’s reputation. Party Down South producers also had trouble securing a location in Biloxi, and were turned down for a location in nearby D’Iberville before finally finding an appropriate house.  Ben “Cooter” Jones of The Dukes of Hazzard fame has also been a vocal opponent of the show.