“King of the Road” Roger Miller Tribute Album On The Way 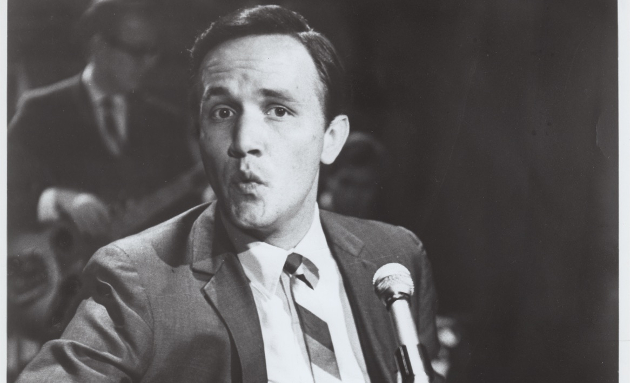 For the remarkable career Country Music Hall of Famer Roger Miller accrued over 35 years of service to music, he still never seems to get his proper due. A true wordsmith and wit maestro, you’d be hard pressed to find someone to offer a sideways word about Roger Miller, even if they don’t like country music. For kids to old folks, Roger Miller can make just about everyone smile, and his genius has revealed itself to be just as potent in the present tense than it was when he was alive.

Announced on Wednesday (6-20), a massive tribute album dedicated to the King of the Road will be making its way to music lovers. And though tribute records come down the pike all the time and make you wonder if your time and money is worth heaping onto songs you already know not sung by the original artist, this one seems to have a little something special in the recipe.

All of your favorite Roger Miller songs like “Chug-A-Lug,” “Dang Me,” “Husbands and Wives,” and other more obscure ones will be included of course, and so will a handsome list of contributors that includes Dwight Yoakam, Jamey Johnson, Dolly Parton, Willie Nelson, Rodney Crowell, Kacey Musgraves, and a few names outside of the country realm such as Toad The Wet Sprocket.

The 31 tracks of King Of The Road: A Tribute to Roger Miller will be released on August 31st. The project was produced by Colby Barnum Wright of Wright of Center Music, as well as Roger Miller’s son Dean. “I think my dad was always under-appreciated,” says Dean Miller. “When you’re funny, sometimes people take you less seriously, but those songs are harder to craft. People within the industry, or people who know the craft of songwriting, understand the level he was working on. But I’m not sure everybody understands the impact he had.”

The impact of Roger Miller was huge. Despite the silliness, Miller was able to land twenty-one Top 20 singles in his career, including two that went #1. And that was just the songs he performed. Miller also had four #1’s performed by others, from “Billy Bayou” by Jim Reeves in 1958, all the way to “Tall, Tall Trees” by Alan Jackson in 1995 and Brooks & Dunn’s “Husbands and Wives” in 1998. He also amassed 11 Grammy Awards, speaking to what Roger’s peers thought about him.

The list of talent for the tribute is stacked, and Dean Miller says finding contributors wasn’t hard at all. “I saw Eric at a bar in Austin and said, ‘Hey, we’re doing this tribute album to my dad!’ Eric immediately said, ‘Yes! I want to do ‘Oo De Lolly!’ And he started telling me how he would do it, right there. He had it all in his head already … I knew of Ringo [Starr’s] friendship with my dad and his appreciation for country music. Also, I wanted to surprise people by showing them who my dad had influenced.”

King Of The Road: A Tribute to Roger Miller TRACK LIST:

Disc Two
Mouth Noises (Banter)
Oo De Lally – Eric Church
Engine, Engine #9 – Emerson Hart ft. Jon Randall
When Two Worlds Collide – Flatt Lonesome
Reincarnation – Cake
You Can’t Do Me This Way and Get By With It – Dean Miller ft. The McCrary Sisters
Chicken S#$! (Banter)
Nothing Can Stop Me – Toad the Wet Sprocket
Husbands and Wives – Jamey Johnson ft. Emmylou Harris
I’ll Pickup My Heart and Go Home  – Lily Meola
I Believe in the Sunshine – Daphne and the Mystery Machines
Guv’ment – John Goodman
Old Songwriters Never Die (Banter)
Hey, Would You Hold It Down? – Ringo Starr
The Last Word in Lonesome Is Me – Dolly Parton ft. Alison Krauss
I’d Come Back to Me – Radney Foster ft. Tawnya Reynolds
One Dying and a Burying – The Dead South
Do Wacka Do – Robert Earl Keen, Jr.
King of the Road – Various Artists