KOKE-FM & KOKEFEST Prove Not All Country Radio is The Same

The commonality of criticizing country radio within the ranks of country music’s classic and independent fans is pretty severe, and for good reason. Generally speaking, country radio is a blob of nationalized playlists and unimaginative music, with little to no curation by the DJs on the ground in local markets. This is especially true for the fans of Texas music artists and Americana listeners, whose tastes and favorite artists are very rarely if ever represented on the big mainstream radio formats and the vast majority of country radio.

But this doesn’t mean all country radio is bad, and lumping it altogether does a disservice to the dozens of radio stations across the country that do cater to independent fans, regional dialects of roots music, and work to build community around the music and its fans. This includes stations like Americana radio giant 89.5 WMOT in Middle Tennessee, 95.9 The Ranch up in Fort Worth, Texas, or Austin’s legendary alternative country music station KOKE.

First founded as a “country rock” or “progressive country” station in 1972, KOKE helped set the foundation for the musical revolution that would turn Austin, TX into the crossroads of country and rock, and the “Live Music Capital of the World.” KOKE is one of the reasons why Willie Nelson found such a warm reception when he moved to town a few months after the station launched its revolutionary format. KOKE played classic country music from The Carter Family, to the songs of Willie and Waylon, and into to the rock and roll realm with The Rolling Stones and others. In 1974, Billboard named KOKE as the most innovative radio station in country music.

Of course over time, format changes and exchanges in ownership left the legacy of KOKE in limbo, but in 2012, primary DJ Eric Raines and others worked to revitalized the iconic Austin radio brand, and brought it under the ownership of REO Radio Group. On July 2nd, 2012, the 99.3 signal started “stunting” by playing Dale Watson’s “Country My Ass” on loop, with voice promotions by Willie Nelson saying, “You’re listening to 99.3 KOKE FM. Remember our motto: We’re Not Happy ‘Til You’re Not Happy.” Soon, KOKE-FM was alive once again.

Unlike corporate country radio stations, KOKE-FM plays a lot of Texas country artists, some Americana music, will delve into classic country, and has been playing a lot of 90’s country songs that have come back into vogue lately. Though it may not be the perfect mix for everyone, it offers a lot of variety and color. But most importantly, KOKE-FM has created a community of fans from their distinctly non-mainstream playlist, and built a station around what many other major country music stations lack: grassroots appeal. 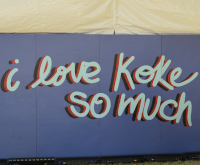 KOKE-FM does not have huge ratings in Austin. To many, it’s considered an also-ran in the growing media market. But when they decided to through their very first KOKEFEST two years ago, the response was so massive, they ran out of beer and water. In 2018, the logistics were much more in order, but a freak August rain storm (it never rains in Texas in August) did in the Saturday night headliners, and dampened the spirit of an otherwise successful event. In 2019, the third time was the charm, and even 104-degree weather couldn’t keep the throngs of KOKE supporters showing up on Friday and Saturday (8-16 & 8-17) to see some of their favorite artists perform, and to be a part of the KOKE community.

The importance of a radio station like KOKE-FM was underscored by the Friday night headliner, Cody Johnson. Now signed to a major label and receiving support from country radio nationwide, this was not always the case for Cody. In the very beginning, it was stations like KOKE taking a chance on his music that made him legitimate, and that instilled his career with the same grassroots support he enjoys today. When Cody Johnson finally did hit it big and signed with Warner Nashville, he was able to do it on his terms since he already had an established fan base.

Johnson almost didn’t play KOKEFEST 2019 though. Last minute, he was afforded the opportunity to open for George Strait at Gillette Stadium in Massachusetts on Saturday—the same day he was scheduled to headline KOKEFEST. But instead of cancelling his appearance, he moved it to Friday, and figured out the difficult logistics to make it all work. As he told the crowd at KOKEFEST on Friday night, it was the least he could do. Eric Raines and KOKE had been there to support him from the very beginning, and even though he’d hit the big time now, he wasn’t going to forget where he came from.

Friday’s KOKEFEST lineup also featured 90’s country star Joe Diffie, fitting in with the station’s format of not forgetting who came before. They also featured up-and-comers like Copper Chief, Chris Colston, Read Southall, Canaan Bryce, and Kody West over the two days. Kylie Rae Harris was the sole woman on the lineup in a scene where there’s not enough of them. Traditionalist Randall King played the role as the guy who could be taking the place of guys like Cody Johnson in the coming months and years as the next face of country music done right. Shane Smith and the Saints proved once again they’re one of the greatest acts to catch live, playing songs from their new album Hail Mary.

And say what you want about Parker McCollum and Koe Wetzel, but the infectiousness of their music and appeal was hard to not recognize as huge crowds sang nearly every single word to their songs during Saturday night’s co-headlining set. Koe Wetzel is the easy-to-criticize, foul-mouthed guy you dread your daughter dating. During his set, numerous bras were thrown on stage, which he then left dangling from his mic stand, while the first few rows in front of the stage were like Sea World-style splash zones as yahoos slung beer over the crowd at certain punctuated points during songs. But underneath all the Koe Wetzel shallowness are songs that speak very deeply to people, and are often deceptively deep themselves. It’s easy to laugh off Koe Wetzel as a bozo. But he’s a bozo that is drawing one of the biggest audiences in Texas music at the moment, and growing every day.

Parker McCollum is a bit easier to get behind, even though he doesn’t look the part of the true country artist and earnest songwriter that he is deep down inside. When he played an extras slow version of “I Can’t Breathe,” it took the breath out of the KOKE crowd too. Recently signed to Warner Bros., (and wearing a hat for the company on stage), Parker McCollum is definitely a guy to watch as the near future of country music with class.

The Turnpike Troubadours were also on the KOKEFEST grounds in spirit. Shane Smith and the Saints dedicated their song “Oklahoma City” to the Oklahoma-based outfit currently on indefinite hiatus, and Parker McCollum performed “Good Lord Lorrie” in tribute to the band. The grounds of the KOKEFEST were not just your regular “field festival.” Along with the regular stock of concessions and merchants were numerous features to make it a full-bodied musical experience. There was a dance floor, art installations, photo ops, the local grocer H-E-B giving away free ice cream, and other stuff to do and see beyond the music.

But possibly most impressive was the size of the crowd that showed up. Some 7,000 to 8,000 people at the least took to the grounds at Brushy Creek Park in Hutto, TX, just north and east of Austin. The festival always felt full, but never felt overcrowded. The throngs of people that fought through the 100-degree weather to hear bands you rarely or never hear on the radio aside from stations like KOKE-FM was quite impressive, and speaks to the grassroots loyalty the station has built by not just trying to follow the trends, but being on the ground floor of the careers of certain artists, interviewing up-and-comers and supporting them from the start, and giving listeners an alternative to the mainstream country format.

What country music radio is missing with consolidation and nationally-programmed playlists is the sense of community that a station like KOKE-FM, and an event like KOKEFEST have been able to create, and in a relatively short period of time. They may not be the biggest station or event in country music, but what they’re building and doing has reverberations well beyond Austin, TX. And the music is better for it.