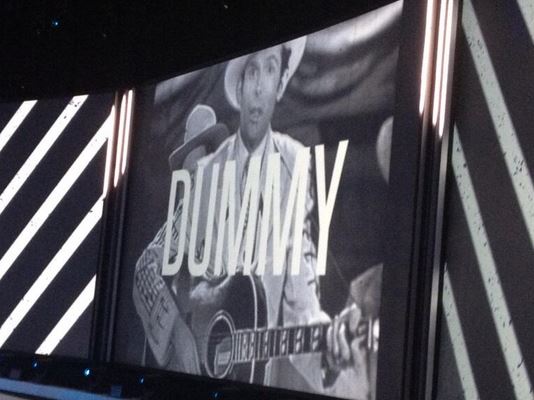 Yes ladies and gentlemen, that is a picture of Hank Williams performing live on The Grand Ole Opry with the word “DUMMY” emboldened in all caps across his chest. The picture was taken at the CMT Awards last Wednesday by Raul Malo, the outspoken front man for The Mavericks who performed at the CMT Awards’ as the house band. The image incensed the singer so much he took to Twitter, posting, “Do we really need to say anymore about the country music establishment? This image ran for three days at the arena.”

Though the picture was likely a test image for the display used as part of the CMT Awards presentation, it symbolizes the palpable lack of respect and understanding for the traditions and artists of country music who sweated, and in the case of Hank Williams, died for the music, and built the legacy that modern institutions like CMT and the CMA now benefit from. Test image or not, how hard would it have been for the image to read “TEST” or to use an image of something else instead of Hank Williams?

But that’s only where the fallout from decisions made at the annual CMA Fan Fest conducted last week begin. Both the CMT Awards and the CMA invited rocker Lenny Kravitz to make appearances as part of the festivities. Though up-and-coming country acts like Ashley Monroe and Kree Harrison were only given 30 seconds to perform on the CMT Awards, Kravitz was given a full slot to execute the classic rock cover “American Woman.” Once again an incensed Raul Malo took to Twitter, saying, “So Lenny Kravitz demanded the AC be turned off in the arena before he came out. We should’ve demanded he turn off his mic…!” and later going further, “So when is country music going to grow some balls and close its legs to every has-been, asshole Rockstar that wants to be on tv? Yes ladies and gentlemen this is the leader of the house band for the CMT Awards tweeting these things.

It got worse, much worse for Lenny Kravitz on Saturday night when he took the main stage at LP Field (the biggest stage of CMA Fan Fest) and proceeded to spare the crowd to death with his rehashed rock tunes, culminating in an excruciating 15-minute rendition of “Let Love Rule” that saw Kravitz pleading with the crowd to sing along.

At one point Kravitz ran out amongst the audience to try and engage them, then ran back on stage to flail his arms around ineffectively, finally giving up 10 minutes after his appointed set end and chiding the crowd for “not being able to get with love” before, ironically, exited the stage while flipping double birds with his back turned to the crowd. Lenny’s antics cost country performers stage time.

The CMT Awards and the CMA Fan Fest are also catching flack for not showing more respect to country legend George Jones who recently passed away. Though on Friday a panel of artists including Jamey Johnson and Randy Travis convened at Music City Center to discuss the passing of the country icon, the CMT Awards only spent 30 seconds in tribute to Jones on their broadcast, stimulating an angry letter from Naomi Judd that she sent to The Tennessean. 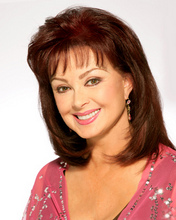 George Jones is to country music what The Beatles are to pop, the Rolling Stones to rock, Elvis to rockabilly, Mozart to classical and Aretha to soul. Yet, the “Country” Music Television awards show allowed only a “by the way” mention of Jones’ death and legacy. Incongruously, they chose alternative music group the Mavericks to perform their short version of George’s “The Race Is On.”

True country music fans are a loyal bunch and are passionate about our roots and heritage. Every year, CMT includes artists of unrelated genres, many of whom some country music fans don’t even know. I suggest the CMT Awards show change its name. Perhaps to “the Multi-Genre Awards Show, Featuring Artists under 30.”

I realize speaking out will cause me to now be forever banned by CMT. But I’m tired of folks messing with my country music. Especially when it involves my dear friend George Jones.

Leave a Reply to Both Kinds of Music Cancel reply