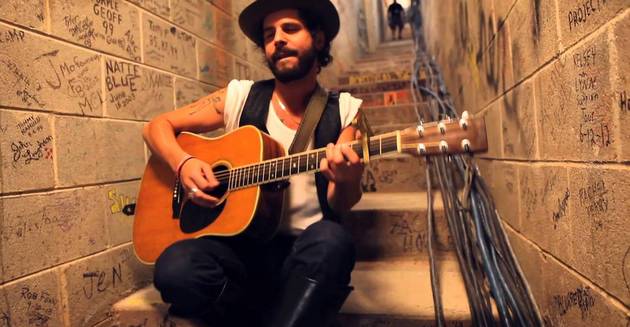 Some artists you just don’t want to know everything about. It’s the mystery surrounding them that enhances the magic of their music. Take Langhorne Slim for example. He’s like an old throwback bard who would travel to your town, become the enchanter of the children, the fancy of the females, and the envy of the men. He seems more myth than man, like an Americana version of Tom Waits, only less gruff, and more endearing. He opens his mouth, and you bend your ear.

Why Langhorne has not become more fancied by the American public at large is a curious case study, while the people who are aware of him tend to become sworn devotees. When he appeared on Conan O’Brien’s late night show in 2013, Conan introduced him by saying, “Two months ago a friend handed me the latest album by my next guest and after one listen I became an instant almost obsessive fan.” Conan was so obsessed, he joined Langhorne on stage at a show at the Troubadour in L.A. in a curiously under-publicized moment.

A similar testimony of instant obsession can be given by many Langhorne supporters—stories of getting passed one of his early albums, or seeing him at some festival and saying, “Whoa, who’s this guy?” Langhorne is one of those people who could get a huge crowd of people to join him in reciting a silly nursery rhyme. Wherever Langhorne Slim leads, people go. His following is very much of the “cult” variety in both style and size. You get a snootful of Langhorne Slim’s music, and there’s a likelihood he becomes your favorite artist.

At the risk of turning some folks off with the characterization, there’s a little Mumford & Sons and Lumineers to Langhorne Slim’s approach—at least that would be the simple and quick way to describe his style of roots music. But what those guys lack in authenticity and grit, Langhorne delivers in handfuls. He must be regarded for his songwriting first, but his music has a heartbeat, a possessing pentameter, a passion and a tempo that is easy to get swept up into, but doesn’t give up style, taste, or substance to do it. He also predates the whole big Mumford/Lumineers roots bubble. It popped, and he’s still here. He may have not measurably benefited from it, but he didn’t lose by it either. Quality soldiers through the whims of trend, and nobody’s talking about not listening to Langhorne Slim anymore because he’s not cool. 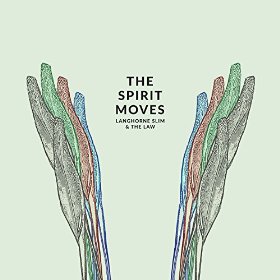 The Spirit Moves is an emotional joyride, taking you on wild, up-tempo forays into the deep visceral experience of music, and then switching to sweet and mellow moments that swallow you with their wisdom-driven tuition. A song like “Put It Together” may sound like a simple broken heart song, but Langhorne has an attack and magnetism to his music that puts him in an elite class of performers who are able to empower a song with the inspiration behind it in each and every performance, immersing the audience in an attentive grip.

Langhorne never takes the easy way out on The Spirit Moves. This is a completely organic record cut to tape, hearing piano, organ, horns, fiddle and banjo on these songs, and procuring them to fulfill each song’s vision through his backing band The Law and numerous auxiliary players. It does have quite a bit of that old-school fuzzy, filmy feeling to the audio, so clarity of recording is not one of its strengths, and sometimes it’s difficult to separate the various instrumental parts in your ears. These vintage-sounding recordings are the hip thing right now and Langhorne abides, but this project isn’t held back by the audio quality like some others. This music needs a little grit.

Langhorn’s Cat Stevens-like voice and delivery can be both gentle as hands holding a baby, and maniacal as a man in a double-crossed rage. One of Langhorne’s best attributes is his ability to shout while not completely serrating the tone. Shouting is a lost art in music, and Langhorne knows how to do it in the spirit of the moment, exuding the emotion only a raised voice is able to convey.

The “hit” of the album has got to be the raucous “Strangers.” Its ridiculously-infectious melody is what sucks you in, but beneath the surface, things like organ and baritone sax give a lot of attitude and depth to this song, making it something much more than just an enjoyable listen. Another song that rises to an infectious chorus that has you shouting along is “Southern Bells.” Langhorne really knows how to build “moments” into his music that make the experience memorable. Some performers can do well at this live, but struggle in the recorded context. For Langhorne, it comes so natural to him that he can do either with aptitude.

Then there’s the other side of Langhorne Slim that is much more subdued, but just as enrapturing. A song like “Airplane” that appears to speak very intimately about Langhorne’s own insecurities is personal enough to make you reflect on your own.

Langhorne Slim isn’t just looking to entertain you with The Spirit Moves. This isn’t just music in the sense that you listen to it, bob your head and tap your toes, and then go about your business. Langhorne is aiming to stir something up deep inside of you that awakens an inner yearning which in many cases the rest of the world is attempting to suppress, and in turn, maybe inspire to you help aid a similar awakening in others. It is this uplifting action that makes Langhorne Slim not just a musician, and When The Spirit Moves not just music, but an effort to enhance the moments of life, not just allow them to pass easier.

Purchase When The Spirit Moves from Langhorne Slim / Dualtone