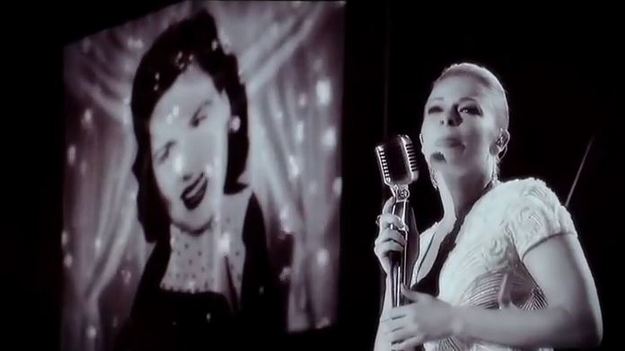 Sometimes you can find the most stunning beauty in the strangest of places.

The Fox Network’s 2013 American Country Awards did not go particularly well by a number of measures. Forget that the fabricated awards show really has no weight in the grand country scheme compared to its more established and revered competition in the CMA and ACM Awards, and it seemed to struggle to garner both media attention and top tier country music talent in support of its 2013 effort. The simple transitions between performances, presentations, and commercial breaks seems to find new frontiers of live TV awkwardness, while the fumbling of words was at moments excruciating.

We all can make mistakes and feel the pressure of the live television camera, but Gary Allan wobbled so hard in one segment he had to start completely over. Co-host Trace Adkins invented a new word, “Simular,” which is a cross between ‘singular’ and ‘similar’, which ironically mean the exact opposite things. And the half-assed feel of the entire night was encapsulated when the night’s biggest award for Artist of the Year went to Luke Bryan, but instead of playing a Luke Bryan song as the star made his way to the stage, a Florida Georgia Line song played instead.

It’s not clear if the snafu was the fault of a lowly board operator, or the house DJ (yes, instead of a band, the ACA’s had a DJ), one Deejay Silver, who brought the audience back once from commercial break with a straight up hip-hop song—not a country rap or even a rap song by a country artist—just simply a rap song, which seemed somewhat appropriate on a night when rapper Big Smo said on national TV, “There was a time when you had to choose between country or hip-hop. But not any more!”

The ACA’s generally served their purpose of selling ad time to sponsors, and showcasing some second-tier names that normally don’t receive any face time on the bigger award shows, artists like Justin Moore, Kellie Pickler, and Rhett Atkins, but the whole thing felt tainted, because of the circumspect nature of the awards themselves, and because the production and writing team did no favors for the hosts, presenters, and performers.

But then here came a Patsy Cline tribute in the last quarter of the show and the whole sad sack theme of the night did a complete 180. In a year that saw the death of George Jones, honoring anyone but The Possum seems a little strange on its own, and why after a solid 1 1/2 hours of smearing the legacy of country’s roots the producers decided to go in this direction seems even more curious. But there was LeAnn Rimes, singing a medley of Patsy Cline songs, and who better to do it than her? Since the beginning of LeAnn’s career, the Patsy comparisons have come pouring in.

But LeAnn, a once top flight country artist full of promise, has fallen on hard times in the court of public perception. Unfavorable headlines about infidelity and divorce have put her at odds with the foot the country music industry wants to put forward with its female artists. LeAnn has been virtually forgotten by the industry, but ironically that’s what made her a perfect fit for the ACA’s.

So the LeAnn Rimes medley of Patsy Cline songs starts, and you’re glad to have a respite from all the pop country shenanigans, but you’re not expecting too much. Medleys are always frustrating to some extent because you never get to feel the full brunt of any individual song. But LeAnn, having been a tireless student of Patsy Cline since her formative years, continued to elevate the moments more and more as the tribute transpired until your attentive hate watching of a circumspect award show fell by the side and you were completely enthralled at the channeling of Patsy Cline’s ghost transpiring before your very eyes. And at the end of the medley, when LeAnn went a capella, and the tasteful sepia filter that the ACA’s had placed on the cameras to afford a vintage feel on the first part of the tribute turned back to color, a downright evocation emerged during Patsy’s “Sweet Dreams” that even the embattled and valiant LeAnn Rimes eventually couldn’t even fend off, bursting into tears during the final turn of the chorus.

No video will ever do the moment justice, because it was a moment you had to share in live. At some point you saw LeAnn smile, like she recognized the spirit of Patsy had entered the room, and then the emotion immediately began to well up in LeAnn, and all who were paying attention.

Trace Adkins, after the commercial break, broke script, took off his hat, and complimented LeAnn with a sincere token and acknowledgement of that singular moment LeAnn was able to create, that was anything but similar to what the ACA’s, and really any modern country music award show is able to deliver.

In a mainstream country landscape searching for female stars, to the point of going outside the genre to field awards show nominees, and in a genre that has virtually abandoned its roots, LeAnn Rimes proved that there’s female talent screaming to be showcased, and continued value in music that has withstood the test of time to deliver moments to remember. Booty-shaking anthems and buxom broads singing songs forged in a cubicle farm aren’t just unfortunate because of the lack of nutritional value of their tunes, it is because they push aside those sweet musical moments that we will reminisce on for the rest of our lives.