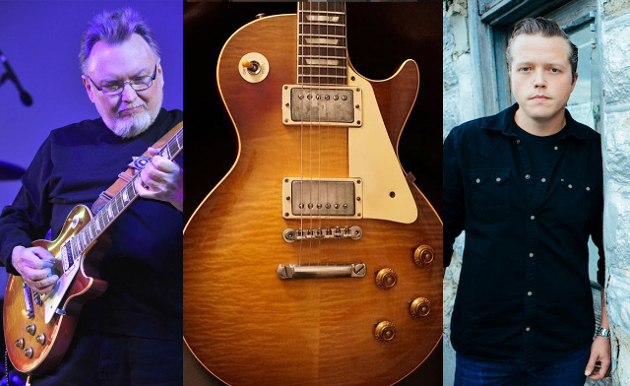 An iconic guitar owned by Ed King of Lynyrd Skynyrd, and that once was stolen from the “Sweet Home Alabama” co-writer at gunpoint, is now in the custody of the King of Americana, Jason Isbell. Ed King died on August 22nd, 2018 at the age of 68 in Nashville. After his passing, many important instruments from King’s personal collection ended up in the care of Nashville’s famous Carter Vintage Guitars and owner Walter Carter, including the 1959 Les Paul known famously as “Red Eye.”

“When it came to guitars, Ed King was a neck man,” says Walter Carter. “He liked it just for the neck, but it has an interesting spot. It came from a hang tag. The guitar was sitting in the window of a guitar shop back in 1960. The sunlight caused everything to fade, all the red to fade except where the tag was, so it got this spot. Ed nicknamed it ‘Red Eye,’ and it was one of his favorite guitars.”

In an interview with Reverb in 2015, Ed King himself told the story of how he came about owning the guitar. “It was owned by a great guitar player in central New Jersey,” Ed explained. “I’d been after him for seven years to sell it. One day in ’82, he called and needed cash for a lawsuit; one of his music stores had burned down. I was there in 30 minutes, cash in hand.”

Over the years the guitar had become legendary for its tone, but it would only be in Ed King’s possession for a short period the first go round. On Fathers Day in 1987, it was stolen from Ed King at gunpoint. “I had some other stuff for sale and it’s a long story, but I kind of got caught unawares and that guitar left, and it’s a good thing I didn’t get shot and killed over it,” Ed recalled. It would take 10 years for him to be reunited with it.

“I’m thumbing through a book at the Dallas Guitar Show,” Ed King explains. “It’s a guitar book, pictures of different guitars, and there’s my guitar in this book. And so I bought a copy of the book. I took it home, and the serial number of the guitar was in the book. So I matched it up against some old inventory records that I had and sure enough, it’s the same guitar. So I tracked it down. Here I thought the guitar may have landed in Japan because the book I bought was totally written in Japanese, but my wife figured out that this guy in Long Island had it. And so we got him on the phone, and it was April Fools Day, 1997, and he thought I was just pulling a joke. He owns a recording studio on Long Island. He was glad to talk to me because he thought I might want to use his studio, and I said, no, I’m calling for a different reason.”

Ed King continues, “So he was very upset, and anyway the guy that I talked to was the procurer of very special vintage guitars for this billionaire in Long Island. And the billionaire owned the guitar, along with many other fine guitars. So anyway a few months went by and … we haggled about it. A writer here in town, Beverly Keel helped me get it back. She wrote a story in ‘New York’ magazine about it and she talked with the attorneys for this guy in New York. Anyway I never talked to the guy who had the guitar, but after six months the attorneys called up and said, ‘You can have the guitar back. Do you want the guitar or the money?’ I said, ‘I want the guitar.’ So they said, ‘Well, come up and get it.’ So I sent a friend of mine to get the guitar, and I still have it. And it’s the best ’59 Les Paul I’ve ever played. It just about plays itself.”

When Carter Vintage Guitars took possession of “Red Eye” after Ed King’s passing, they brought Jason Isbell in to play it for some demo videos on New Year’s Day. Isbell played it, and was blown away. “Don’t think I’ve played a finer electric guitar than this one. It haunts me now,” he said after the experience. A few days later, it would be his.

“When I was 8 or 9 years old, my uncle Phil sat me down and taught me to play ‘Simple Man’ on his MPC Electra Les Paul copy,” Isbell said on Instagram. “Then he gave it to me. I learned to play on that guitar and I still have it. Thanks to the family of Ed King and our dear friends at Carter Vintage Guitars, I’m now the custodian of 9-0891: Red Eye. It’s the finest electric guitar I’ve ever played or heard, and it will be heard again, not locked away forever in a vault. I’m infinitely grateful to the late Ed King and his family, and I’ll treat the guitar and his legacy with care.”

Jason Isbell played the guitar during his appearance at the Willie Nelson Tribute on Nashville at the Bridgestone Arena Saturday night (11-12). “It’s one that Gibson copied and replicated for their Collector’s Choice series,” Walter Carter of Carter Vintage Guitar explains. “The got the neck probably a micron off, and Ed wasn’t happy with it. So to show that he wasn’t happy, he refused to take the #1 off the line of this model, and it happened to come to Carter Vintage Guitars, and he bought it from us rather than taking it for free from Gibson.”

Also part of the Ed King guitar collection at Carter Vintage Guitars was a 1958 Les Paul owned by Ray Gomez that was played on the jazz fusion album album Stanley Clarke called Schooldays, and the 1973 Fender Stratocaster that King wrote and played the iconic lick of “Sweet Home Alabama” on.