Amidst their 20th Anniversary as a band, Th’ Legendary Shack Shakers have announced they have signed to legendary punk label Alternative Tentacles, and will be releasing their first album in five years The Southern Surreal on September 11th. The news comes after the band resumed touring last year after calling it quits in November of 2012. 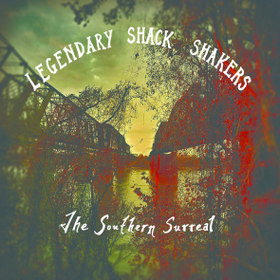 Composed of 15 tracks, the album includes the regular lineup of the Shack Shakers, including drummer Brett Whitacre whose heart condition was one of the reasons for the previous hiatus, and a few notable contributors, including Billy Bob Thornton of The Boxmasters, former Shack Shakers guitarist and member of The Jesus Lizard, Duane Denison, and a sax player most known for his work with Tom Waits, Ralph Carney.

“I guess I have musical A.D.D.  I always like to keep ‘em guessing”¦” Col. J.D. Wilkes told Saving Country Music about deciding to bring Th’ Legendary Shack Shakers back again. “[Brett Whitacre] will be drumming again and he is indeed doing fine. He has a new daughter and a thriving art career. Things couldn’t be better”¦ Our sound is ever-evolving, so come catch the ‘New Testament’ era of our story arc!”

Even when the Shack Shakers were on hiatus, J.D. Wilkes was staying busy with his other band The Dirt Daubers, and working on an album for fiddling elder Charlie Stamper. His wife and fellow Dirt Dauber member Jessica Wilkes also has a solo album called Lone Wolf that was released on June 16th.

“I always play the music I feel at any given period,” says Col. Wilkes. “Jessica was getting more into rock n roll, so we wrote a record together. The Dirt Daubers will always be the band that my wife and I are in. Therefore we will continue playing from here on out, alternating tours with Th’ Legendary Shack Shakers, my book signings, painting gigs, filmmaking stints and solo banjo appearances. All of these express different facets of who I am.”