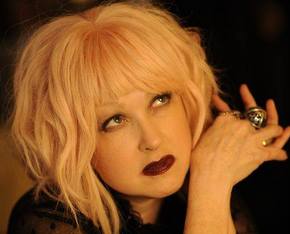 Scrunch in and make some more room on the back of the country bus, because it looks like a few more folks are getting on, including 80’s star Cyndi Lauper, and One Direction heartthrob Liam Payne.

Cyndi Lauper told the London-based celebrity crotch-sniffing site Bang Showbiz, “I don’t know if you listen to country music but I want to work with Seymour Stein— he was the co-founder of Sire Records—and I’ve always wanted to work with him. So I figure while I’ve still got teeth in my mouth let me go work with him!”

Sire Records was launched in 1966 by Stein primarily to feature underground British bands to the American market, eventually becoming a big player in the punk rock and new wave scenes. The label was later purchased by Warner Bros. and is still around today.

Lauper continues, “I also want to work with Tony Brown down in Nashville and do a country record, finally! I want to record all those songs I used to sing my guts out in my apartment to! It’ll be out next year.”

Tony Brown is the famous country producer, best known for working with George Strait, Vince Gill, Reba McEntire, Steve Earle, Rodney Crowell, and being the President of MCA Nashville in the 90’s. If the new Lauper album includes songs she used to sing in her apartment, it sounds like there will be some covers involved.

Not to be outdone, the British boy band One Direction is about to go on an indefinite hiatus in 2016, and one of the band’s members, Liam Payne, is writing country songs, possibly for a run at country, or possibly not. Here’s the quote that has all the little girls in London agog, and thinking Liam may pull a Steven Tyler:

“I have written country songs. I started out doing rap songs. That’s where my mind is set.”

Okay, huh? So what exactly is your mind set on? Country songs? Rap songs? Or does it really matter what you call them these days, it’s all pretty much the same to a singer from a boy band.

Though much ink has been spilled about Liam Payne “going country,” it sounds to me like the future is still uncertain.

“A lot of people say to me, ‘Oh, you’ll go solo’, but I haven’t thought about that,” says Liam. “If the right song comes along and I think I should sing it, then I will release it as a solo artist. Otherwise, I’m happy being behind the scenes. When the other boys go solo I would love to write songs for them.”

Sorry folks, I’m out of zingers. At this point, it’s just sad.