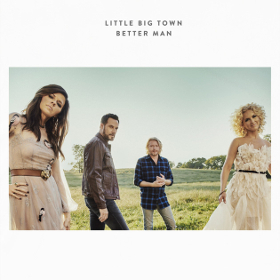 Taylor Swift should be releasing a new record right now. She’s released a new record in either October or November every other year for the last decade. But 2016 will be where she breaks that cycle, likely from the sense that she’s overexposed, despite the lack of new music, and due to the recent attention-grabbing headlines from high-profile breakups with celebrity beaus, and of course the whole Kanye West/Kim Kardashian business. In fact in the notorious recorded phone call between Taylor and Kanye, Swift said then she was worried about overexposure—something she’s been prescient of throughout her career.

But like all songwriters, Taylor Swift remains burdened by the desire to say things and share them, so apparently she reached out to Little Big Town to record this new track. It’s a little bit of a strange scenario, but also seems to make sense in some regards. Frankly, Taylor Swift’s involvement in this song is the most interesting thing about it. Whether you have your nose deep in celebrity tabloids or couldn’t give a shit, you still can’t help but think this is Taylor Swift expressing her heartbroken frustration with one (or both) of her very recent loves with Little Big Town as the vessel. Why else would she be so exercised to get it out to the public now?

There had to be a lot of pressure on Little Big Town to get “Better Man” right—to really buy into the narrative being conveyed. And they do, especially Karen Fairchild who takes the lead on the song. It’s also smart how in the video for “Better Man” they allowed Fairchild to sing a chorus live into the camera, putting an extra bit of breathing emotion into the effort. Little Big Town really sells their performance of this song as more than just a random, unexpected Swift cut.

But the problem with “Better Man” is the problem with every Little Big Town song. They’ve gone from sort of this rootsy vocal group to wrangling away the title of today’s country mainstream dry adult contemporary perennial from Lady Antebellum. The production of this song couldn’t be more pallid, uninteresting, and non-country, which is a bit of a shame because the chorus actually works great for a country song, and so could the theme. But this track endured a whitewashing with electronic drums and such as opposed to putting any sort of signature sound stamp on it.

“Better Man” sounds like a Taylor Swift song in the way the chorus rises and it speaks to her seemingly ever-present man troubles. But on this track Swift appeared to be more willing to blame others, and only expresses vulnerability by admitting she misses this man she wish was better. What mistakes did Taylor Swift make in the relationship? See, these are the kinds of thoughts that run through your head when hearing it. You almost have to remind yourself Little Big Town is even involved.

Granted, the song does carry a good bit of emotion, and it’s likely to do well, especially with a nudge from Taylor Swift whose not going to allow anything she’s involved in to go overlooked. All of a sudden Little Big Town has become one of the biggest performers in contemporary country. They’ve won the CMA for Vocal Group of the Year the last four opportunities, and are beginning to put a Miranda-esque run together. But what do they do that’s signature? Compare this with the contributions of the Oak Ridge Boys or The Statler Brothers from country’s past who you would immediate recognize when they came on the radio.

“Better Man” is interesting for many reasons. Unfortunately, most of those reasons have little to do with the music itself. But this track is far from the worst transgressions on country radio, and it is refreshing to hear song that’s not all rosy targeted to the mainstream set. It will perform well as a cozy winter single tiding over Taylor Swift fans for another few months. “Mostly harmless,” is probably the most fair assessment of “Better Man,” I suppose.