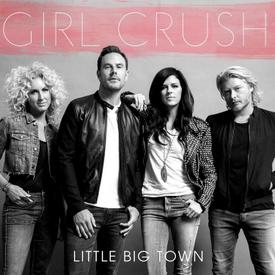 Little Big Town’s latest single called “Girl Crush” is stirring a little bit of controversy from what some perceive as racy, lesbian themes, while others are acting shocked that the song could be misconceived in such a way, making “Girl Crush” a country music battleground for conservative values being fought in the shadow of country music’s big coming out party lately with Ty Herndon and Billy Gillman making their big announcements, and the success of Brandy Clark and the Kacey Musgraves’ song “Follow Your Arrow.” But in the the end they’re all feeding into the exact reaction Little Big Town wanted from the song—attention.

“Girl Crush” is not a lesbian song, and anyone coming to it from that camp is incorrect in their assessment. At least that’s what the songwriters Hillary Lindsey, Liz Rose, and Lori McKenna, as well as the performers from Little Big Town say about it, and there’s no reason to think they’re lying. However, the way the song works, especially with a quick listen (which let’s face it, is the way most mainstream music listeners hear their music), it’s not hard to understand why it could be perceived in this way. In fact it’s probably a little easier to understand the lesbian perspective on the song than to expect the average listener to peel back the somewhat convoluted lyrical structure and unravel all the layers to get to the heart of the message.

“Girl Crush” is a song about jealousy, and a woman wanting to superimpose herself into the place of her lover’s new mate, but with lines like….

“I want to taste her lips
Yeah, ’cause they taste like you
I want to drown myself
In a bottle of her perfume”

….it’s not hard to see how the song could be misconstrued. In fact it’s pretty easy to think that as the writers were spinning the lines, they would see this androgynous ambiguity as an asset, and maybe the vision of let’s say, two women kissing, would be a way to spice up the song for listeners, or at least adding to the intrigue of the track.

These are not criticisms of the song, mind you. These could be considered assets, and this song has be heralded for being very well written in many corners. This praise may be more the symptom of the dearth of well-written songs in the mainstream as opposed to the “Girl Crush” actually being well-written, but that’s in the eye of the beholder. The song also offers a very stripped-down production, with this walking, blues-inspired guitar line offering the only significant instrumental clothing. If nothing else, it is a very interesting track for the mainstream world, especially since it has found some moderate success.

Little Big Town is a band that has always benefited from some pretty staunch champions. Maybe it’s because they’ve been around so long compared to other mainstream acts. Maybe it’s because older listeners can relate a little better to the lineup compared to the younger artists dominating mainstream country. But the whole “controversy” surrounding this song smacks so much of baiting, and maybe some marketing, that you almost feel dirty for taking a side.

The country music site For The Country Record published a guest post from “TexMex” a few days ago who says they work at a Texas radio station that put “Girl Crush” in a lower rotation after receiving complaints about the song’s potentially-lesbian themes from listeners. “To my surprise, after explaining the song to more than a handful of people, every one of them responded with basically the same thing (paraphrased): ‘You are just promoting the gay agenda on your station and I am changing the channel and never listening to you ever again!!'” TexMex characterized.

The problem is, Little Big Town and the songwriters not only knew this song would stir chatter, they were betting on it. As Edward Mack of Wide Open Country said, “The title ‘Girl Crush’ is a little misleading. So are some of the band’s comments about the song, which are meant, no doubt, to stir the rumor mill.”

So if some “closed-minded conservatives” have an issue with the song, people have a right to disagree, but I don’t think they have a right to be shock or surprised, or even act morally superior. News flash, but country music is a conservative format. It doesn’t make bigotry toward the LGBT community right in any way, but when you’re betting on raising some hairs with your song, which “Girl Crush” does, you can’t get angry when that is the result. Complaining about the song being downgraded at radio may also be moot since without the controversial element, it may have never been added at all.

“Girl Crush” is sort of this middling, pedestrian song meant for the female adult contemporary demographic of country. You add this layer of intrigue about who is kissing who, and that’s what makes it a single. This isn’t an endorsement for the song getting docked in the rotations of radio stations, or for people taking incorrect misconceptions away from the song and using them for “closed-minded” purposes. But the songwriters, label, and Little Big Town had to know what they were getting into here, and if it weren’t for the potential of those misconceptions, this song likely would have never seen the light of day to being with, especially as a single.