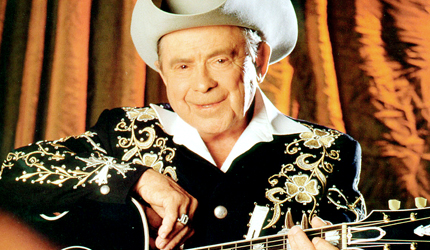 A country music legend, and one of the oldest living country music performers from country’s golden era is in critical condition in a Nashville area hospital. “Little” Jimmy Dickens, one of the most venerable members of The Grand Ole Opry and a country music Hall of Famer, was admitted to the hospital on Christmas for an undisclosed illness. He just turned 94-years-old on December 19th, and performed on December 20th as part of the Opry’s birthday celebration on his behalf.

“Little” Jimmy’s wife, his family, and The Grand Ole Opry are asking for prayers for the ailing artist, who symbolizes one of the very last living links to country music’s legendary past. Dickens became a Grand Ole Opry member in 1948 and was inducted into the Country Music Hall of Fame in 1983. When Hank Locklin died in 2009, “Little” Jimmy became the oldest living member of the Grand Ole Opry, and still regularly appears on the program. He was born in Bolt, WV in 1920, and was nicknamed “Tater” by Hank Williams for his short, 4′ 11″ stature.

Cards and well wishes can be sent to “Little” Jimmy Dickens via the Grand Ole Opry at the address below. Saving Country Music sends its thoughts and prayers out to the ailing star.

***UPDATE (12-31) – “Little” Jimmy Dickens is improving according to Grand Ole Opry general manager Pete Fisher. “Each day brings noticeable improvements, and his doctors seem very pleased with the progress he is making,” Fisher says. “I, along with his family, are grateful to all for your thoughts and prayers.”