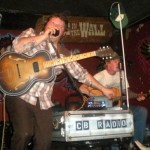 I saw both of these acts recently at the Hillgrass Bluebilly Lunch Party, but because I was too busy managing the live internet audio stream during the Boomswaggler’s set, and the stage was so surrounded by teeming “dirtyfoots” for Possessed’s nightcap performance that I couldn’t steal even a peep, I headed down to Beerland in Austin, TX Friday night to take in the double bill of Hillgrass artists.

The Boomswagglers are a band on the rise people, mark my words. For an act with no formal release, and up to this point no major touring or even residency in a local scene, they have created quite the buzz and following. There were people there that night just to see The Boomswagglers, many of them singing along to songs and screaming out requests.

Unfortunately the sound was pretty muddy, and the beginning of their set was a little rough. But when they were joined on stage by Possessed by Paul James, they rallied:

A similar observation I had seeing them previously is that they are both extremely-talented guitar players, but their use of tones and volume doesn’t always lend to that being translated to the audience. Same could possibly be said for lyrics. But this one song emphasizes both:

Don’t take it so literally ladies.

And be aware, The Boomswagglers do have a big release and tour coming, but they are making sure to get it right, because they are worth it, so no specific details just yet on either.

Next was Possessed by Paul James, and of the three times I have seen him live, this was by far his most inspired performance. Not that the previous two were bad, but this was just a different, more rowdy energy. Konrad is a school teacher, and my guess would be a damn good one, but he mentioned during the show his frustrations for the red tape involved in teaching, and wondered aloud if his future wasn’t better cast in music. Like I iterated in my review of Feed The Family:

Possessed certainly has the chops to be a full-time performer if he wanted to, but he’s chosen his path from a belief of what is best for his family, and because of a dedication to service that was instilled in his Mennonite upbringing. I respect Possesessed’s decision, but I hope he understands that his music is a service as well; a touching, uplifiting, empowering experience that the world is a better place because of.

Regardless of the reasoning, Possessed was on fire on Friday. His gear was dogged by technical difficulties, but instead of adding hiccups to an otherwise good show, it created moments of spontaneous beauty, like when he couldn’t get his banjo and amp to work together, so he headed out into the crowd to make sure energy didn’t die:

When I posted this year’s Muddy Roots lineup, there was a reason I put Possessed by Paul James’ name second to the top. He is a headliner, and an elder of the fusion of country, folk, and blues, and has the songs, stories, road time, wisdom, and bald spot to back it all up. The lighting wasn’t good that night, and as per usual of a PPJ show, the front of the stage was crashed by rabid fans and sight lines were few if any. But the music and energy was great as always, and below are a few more vids worth checking out. I don’t know, but for some reason I am really digging what the bad lighting and sight lines created. I think they capture the magic of the night better than a clean video could.