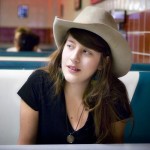 Last night was an occasion I’d been looking forward to for a while: Justin Townes Earle‘s sober (hopefully) return to Austin, TX, but in the traveling party as the support act was Caitlin Rose, a Nashville-based singer/songwriter that I’ve been asked to give an opinion on many times, but for whom online music and videos had rendered my opinion inconclusive heretofore.

The first challenge was getting in the door, since I have “fallen out of the graces” of the Justin Townes Earle camp. But The Triggerman’s tentacles run deep my friends, and I was able to slip in like the sands of Sonora under the door sill. Actually, I walked up to the front door and said “Do you know who I am !?!? I’m the goddamn Triggerman! Taylor Swift wrote a song about me! TAYLOR SWIFT !!” And after that they laid the red carpet, set me up with a $50 bar credit, and I drank top shelf all night.

Being a “tabloid” journalist has its perks.

A review of Justin Townes Earle is coming, but Caitlin was good enough that I wanted to give her some individual attention.

The first thing you take away from seeing Caitlin Rose live is her strong voice and confident delivery. Effortless command of the high vocal range punches home the themes of her morose songs and sucks you right in. They are backed by occasional, tasteful harmonies, and likewise tasteful and traditional instrumentation from a lead Telecaster and a Sho-Bud pedal steel guitar. Caitlin keeps the rhythm in her hips, swaying back in forth during songs; an asset for any female performer, and a necessity when you’re rolling sans bass and drums.

Signature songs like “Shanghai Cigarettes” and “Sinful Wishing Well” were much better than their recorded or video counterparts. But where I find issues with Caitlin is where to file her music, and not just in the always-tiring genre name game bit, but just in what mood I should approach it with.

It would probably annoy her to hear this, but there are some hipster elements, however subtle, in what she does: the timid approach most notably. She called out hipsters from the stage of The Parish in Austin, warning that in a few months, the town would be filling with them and their Ray-Ban sunglasses for South by Southwest. Hey, hipsters deserve good music too, but more on point, the disparate elements that make up her music make it a little difficult to compute for me. She has some great lyrics that put her in sort of the tragic, self-destructive, almost underground hard country realm, but then there’s a lot of “alt-country / NPR audience” in the way the music is conveyed.

Between songs she appeared to be somewhere between nervous and maybe even annoyed. Though during each performance, she was “all in,” 100%, even though she would stare forward, reluctant to make eye contact or engage the crowd. It was like she was singing to us, not for us. I felt like she needed to go backstage, cry her eyes out, then get angry and punch a wall, and then come back on stage fearlessly and kick all our asses. I’m sure some will rebut that Catlin is shy by nature. I measure artists not only against other artists, but themselves, and what seemed frustrating was not that Caitlin was unable to cut loose, but that she was, but wouldn’t.

Still I’m going to give her a positive review. I think you should poke around the internet for her stuff, and if it speaks to you, go and see her live or buy a CD. She is an up and comer with a young band, and a voice and writing skills that will surely afford her an audience for years to come.