On Friday night (5-4-12) we attended a show of reigning Saving Country Music Artist of the Year Justin Townes Earle at Antone’s in Austin, TX’s increasingly-crowded west downtown district. The Bloodshot Records-signed son of Steve Earle was in town in support of his latest record Nothing’s Gonna Change The Way You Feel About Me Now, with a full band behind him for one of the first times on tour.

Opening support was given by Tristen, an indie rocker who was sporting a new short haircut (these things are important to the frau I have found) that was punctuated by an eternal tress clogging her vision on one side. She dazzled the crowd with high-charged and catchy original indie-rock compositions in a fun show, punctuated by her ending number where she shirked her electric guitar and business blazer to dance around the stage in her very short green sequined mini shorts, gesticulating the salient points of her song.

Tristen captures the retro feel of the best of Brit rock and 80’s glam, reminding us that pop was not always such an awful alternative to people who appreciated good music. Her performance left you wanting to check out her music further, which in the end is the perfect goal of any opening artist. She’s got a little Natalie Merchant in her (see Tristan from SXSW).

For the last few years Justin Townes Earle’s touring party featured Josh Hedley on fiddle, whose since moved on to work with Jonny Corndawg, and Bryn Davies, the beautiful upright bass player who is now part of Jack White’s all female band amongst other projects. There’s no drama behind the name changes. With the Memphis approach to the new material, fiddle was not needed, and when talking to new bass player Vince Ilgan, he said that Bryn was taking some time off to “have his baby.” John Radford also joined them on drums, and Paul Niehaus (Calexico) was on lead guitar and Sho-Bud pedal steel. 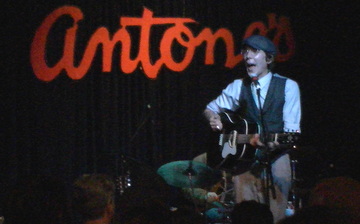 As first and foremost a singer-songwriter, and an elite one of the modern era at that, Justin Townes Earle started the set off solo, and on three other occasions stayed on stage while the band took a break. Justin is always at his best when he’s alone. Backing players are simply there for texture. The full sound complimented the new material well, which was showcased heavily in his set. Now on his 4th full-length release, he’s come to the point in his touring life where set list decisions are difficult. At one point a request was shouted out from the crowd. “I know what I’m doing,” Justin responded to the delight of the audience. “We’ve thought this all out very carefully.”

As one of the first dates on his national tour, this was a test run for Justin’s plan. The band chemistry was good, but you could tell it was still early in the development. After songs, the band would exchange glances, looking pleased and almost surprised that what they had been practicing was well-received by a crowd that went from rowdy at times to completely hushed from the respect Justin can command. It was a sold out show, with a strange mix of patrons that ranged from preppy college kids, rough-edged typical Bloodshot Records fans, to elder NPR listeners grumbling about no seating being provided.

Justin Townes Earle looked the healthiest I have ever seen him. Strong, alert and in the moment, wearing a paperboy’s hat with long sideburns creeping over his ears, and a vest over a long baby blue shirt with the sleeves rolled up showcasing his arm tattoos. A bead of sweat formed across his brow early on this hot and humid Texas evening; the moisture causing havoc with the guitar tuning marking the night’s only setback. 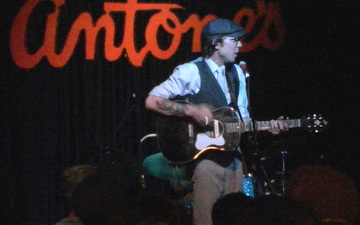 Along with most of the material from the new album, Justin played “My Starter Won’t Start” in his signature and unique guitar style borrowed partly from blues finger picking and and partly from clawhammer banjo, as well as “Mama’s Eyes” after unleashing an unveiled shot at his dad for not being around back when. “I may put my daddy in a home, but I’d never put my momma in a home, shit. She was the one that raised me.” He also featured the train-inspired “Halfway to Jackson”, the “Can’t Hardly Wait” Replacements cover, and the gospel-esque “Harlem River Blues” amongst others.

It was going to be impossible for Justin to eclipse or even match the feat of his last Austin show that I have since deemed one of the best shows I’ve ever seen live, and that is okay. The venue, the crowd which was noticeably younger than previous shows, the strength of material among other factors felt a little like challenges to overcome for Justin in comparison to previous performances, but he presented himself well, as he continues to make the case for himself as one of our generation’s premier songwriters and solo performers. Justin feels mere steps away from graduating to a theater circuit, which would probably be a better fit for his music and approach and the crowd it attracts. As would a wider audience, because that is what his music deserves.